Palace to public: Don’t hastily conclude that judge who freed activists was red-baited 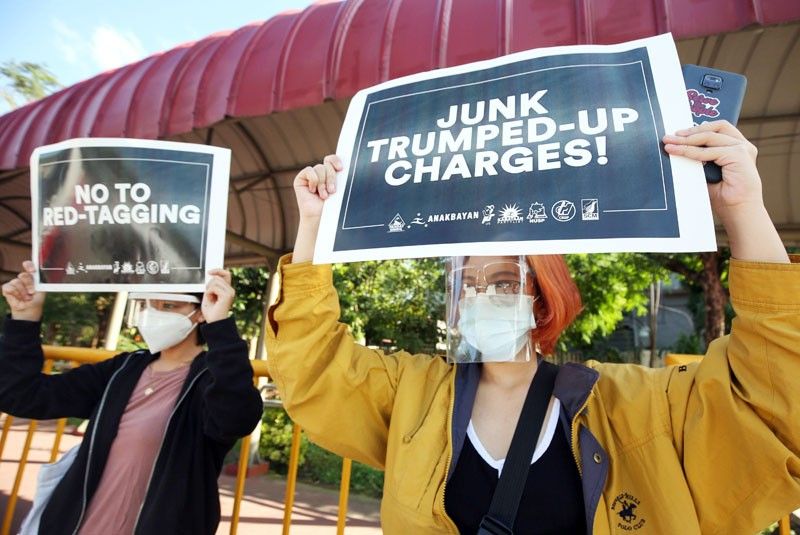 MANILA, Philippines — The public should not immediately conclude that the judge who dismissed the case against two persons accused of being allies of communist rebels has been red-baited, Malacañang said Thursday.

Last month, Judge Monique Quisumbing-Ignacio of the Mandaluyong Regional Trial Court junked the illegal possession of firearms and explosives case against trade unionist Rodrigo Esparago and journalist Lady Ann Salem. Esparago, Salem, and five other individuals were arrested in a police raid that coincided with the observance of Human Rights Day last December 10.

Earlier this week, a tarpaulin sign linking Ignacio to communist rebels was seen at the corner of Shaw Boulevard and EDSA. The sign, which contained the logos of the Communist Party of the Philippines, its armed wing New People's Army, and the National Democratic Front, made it appear that the rebels are thankful to Ignacio for the speedy release of Salem and Esparago. Activists have assailed the attempt to associate the judge with rebels, describing it as an attack against the courts.

Presidential spokesman Harry Roque, however, called on the public not to draw "hasty conclusions" about the incident. He said it is also possible that the enemies of the government are behind the display of the tarpaulin.

"Anyone can come up with such tarpaulins. So let us not conclude that Judge Ignacio was red-tagged. Our authorities are investigating already this incident," Roque said at a press briefing.

Roque expressed confidence that the persons behind the tarpaulin would be identified and caught, noting that there is CCTV in the area where it was placed.

"If Judge Ignacio was really red-tagged, the president himself would provide protection to judge Ignacio if necessary. That is the assurance of the president but for now, let us not make hasty conclusions because anyone can place that tarpaulin," he said.

Roque also disputed claims that the red-baiting of Ignacio indicates the continuing attacks on members of the legal profession.

"That’s already a conclusion which has not been established yet," he added.