Palace: Up to DILG to check if Sinas skipped health screening in Calapan visit 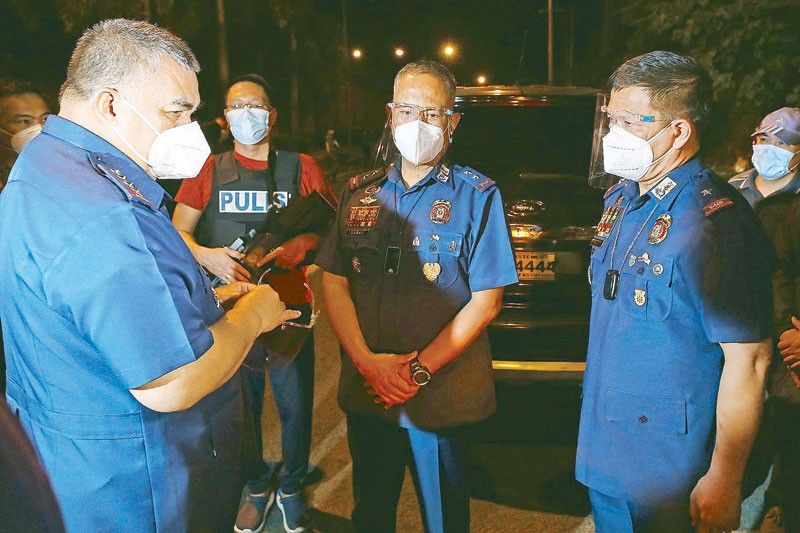 MANILA, Philippines — Malacañang is leaving it up to the Department of the Interior and Local Government (DILG) to look into the claim that police chief Gen. Debold Sinas skipped COVID-19 health screening in Oriental Mindoro.

The Oriental Mindoro provincial government said Sinas did not undergo health clearances at a pier in Calapan City when he visited the province last Thursday.

The local government made the disclosure on the same day it was announced that the police chief tested positive for COVID-19. Sinas, who is now on quarantine at Camp Crame in Quezon City, went directly to the police regional headquarters, the provincial government added.

"I leave that to DILG, because it has supervision over the PNP (Philippine National Police)," presidential spokesman Harry Roque said at a press briefing.

The DILG previously investigated protocol violations by officials but no high-ranking official has been made to account for lapses in, for example, ensuring physical distancing at public events.

Sinas, who was criticized last year for a birthday celeberation during the Luzon lockdown when gatherings were prohibited, has also been previously absolved for lapses.

Justice Secretary Menardo Guevarra agreed that the incident involving Sinas is "a matter for the DILG to consider."

"But for me, what is more important, apart from skipping the health screening is whether General Sinas committed other violations when he visited that place. Was there a mass gathering that was not authorized or improper wearing of mask and face shields or social distancing? I think those are the more important concerns," Guevarra said.

"With regard to entering a place, it already happened so we cannot do anything about it. It’s an administrative procedure only for purposes of screening people who will enter. But I don’t know if there is an ordinance imposing penalties on a person who wilfully did not undergo health screening so let’s leave it to the DILG," he added.

Last year, Sinas stirred controversy over a May 8 'mañanita' birthday party that violated a ban on mass gatherings in areas with active COVID-19 infections. President Rodrigo Duterte defended Sinas, saying it was not the police general's fault if there were people who serenaded him during his birthday.