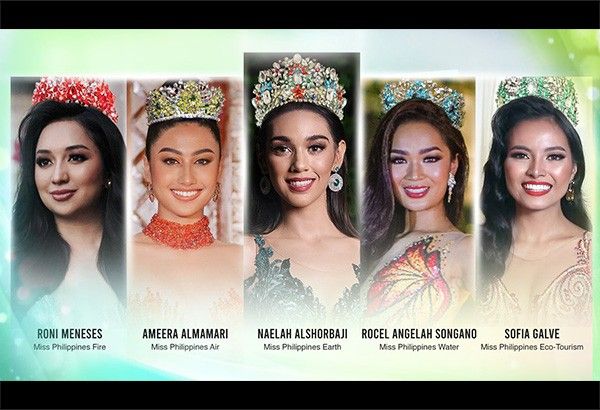 "I would like to thank everyone who supported me through my difficult journey. I really wanted to be Miss Philippines Earth," blurted the teary-eyed beauty after being informed she won the crown.

Rocel Angelah Songano of Iloilo City was proclaimed Miss Philippines Water 2021. She was one of the top three eco-videos, winning the slot for the Visayas region.

The other candidates who made the cut to the semi-final round were:

The show began by presenting all the candidates in three batches of 22, featuring them in a montage of denim wear, swimsuit and evening gown, prior to the announcement of the Top 20.

Sixteen of the girls qualified through the round of virtual challenges, three from the eco-video challenge, and one from the online votes on the Ecosystem app.

The announcement of the Top 10 ushered in the final interview, where each finalist, after being called, answered the same question for 30 seconds.

After that was the swimwear parade, which led to the announcement of the winners.

The five other finalists were:

It also recognized the initiative to recycle plastic by the private sector. The brands that were singled out were Ayala Land, GCash, Cebuana Lhuillier, SM Green Bag and Unilever Philippines.

Miss Philippines Eco-Tourism 2020 Ilyssa Marie Mendoza sent her farewell walk video from Australia, and was not physically present with the other queens at the Carousel Compound.