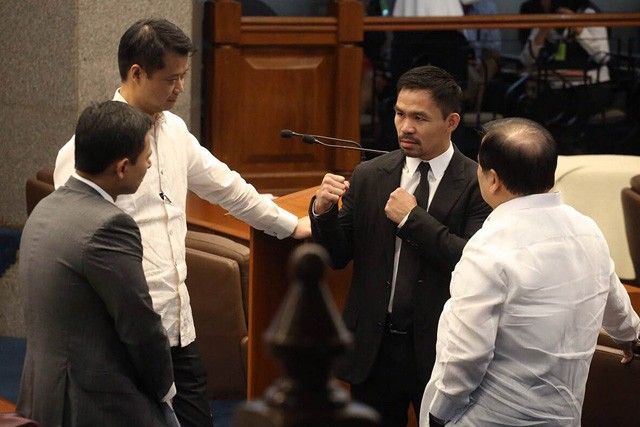 MANILA, Philippines (Updated 5:22 p.m.) — The faction of the Partido Demokratiko Pilipino–Lakas ng Bayan led by Sen. Manny Pacquiao has formally nominated the boxer-turned-senator as their presidential candidate and standard-bearer for the 2022 polls.

This was disclosed at what the faction claimed to be the party's 11th National Assembly held Sunday afternoon. The assembly was largely held online, with the party claiming "99 percent" of its base and partners were attending virtually.

"Yes, I accept [the nomination,]" Pacquiao said in response.

'I am a fighter and will always be a fighter'

Pacquiao, president of his faction of the administration PDP-Laban party, thanked the party's grassroots members and partners for the nomination.

"I am a fighter and I will always be a fighter inside and outside the ring. All my life I have never backed down from a fight," he said in mixed English and Filipino.

The Senate's top absentee said that he "stayed quiet" in the past few months despite attacks on him — most recently by President Rodrigo Duterte, who is chairman of a separate PDP-Laban faction.

Pacquiao referred to himself as a "son of a poor family" and someone "they are trying to bring down."

"To those questioning my abilities, have you ever experienced being hungry? Have you experienced having to beg for money from neighbors?" he said.

"The Manny Pacquiao before you today has experienced poverty…and many other sacrifices in life just to provide for his family."

'People tired of promises of change'

Pacquiao said that the country needs "progress [and] transparent governance," saying the people are "tired" of promises of change.

Like Duterte did in 2016, the senator said it was "time to move on from corruption" and for a clean government to come into power. He made no mention of concrete plans for his platform and instead made the same strongman promises he claimed to be opposed to.

Addressing corrupt officials whom he did not name, he said: "Your time is up. Soon you will be together in jail. We are tired of your promises and excuses."

Until the recent rift with the president, Pacquiao had been a political ally and outspoken defender of the Duterte administration. Among the administration's policy positions that he has supported are the revival of the death penalty and the implementation of the "war on drugs."

As he quoted scripture, Pacquiao added that he was hoping for the support of party members moving forward.

"We are ready to rise to the challenge of leadership," he said. "As long as we have our people's trust, then we are unbeatable because God is with us."

This comes just a few weeks after the opposite faction's own national assembly.

On September 8, Cusi also filed a petition urging the Commission on Elections to declare the Pacquiao-led faction illegal.

The Commission on Elections has yet to decide on which of the two feuding factions of the PDP-Laban is legitimate and which slate will be the official one of the administration party.

Sen. Pimentel stoked the flames of the simmering feud earlier in the program, calling the rival faction "greedy." Members of the faction also called themselves "the real PDP-Laban."

"There is a good chance that we will win the coming election. The real PDP-Laban will run our government," Pimentel said.

— with reports from Xave Gregorio