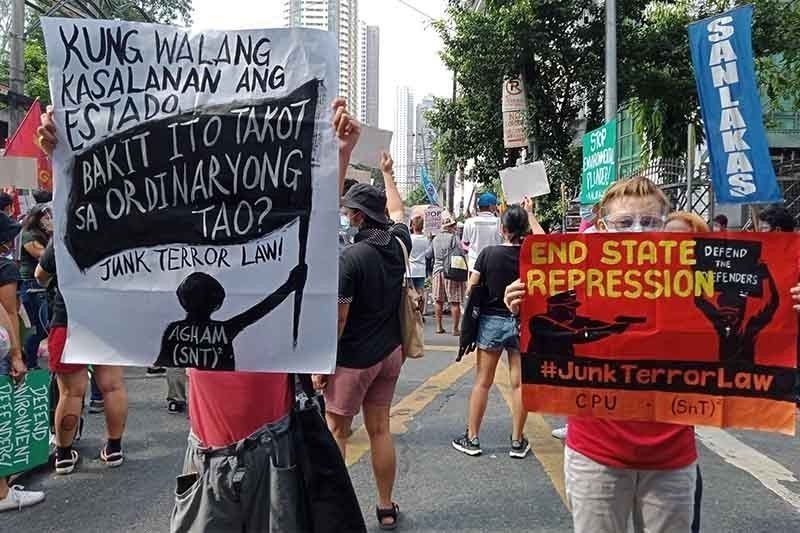 MANILA, Philippines — Petitioners against the Anti-Terrorism Act of 2020 called the Supreme Court’s attention to the alleged intelligence-gathering and profiling against them and their members by the Department of the Interior and Local Government.

The petitioners led by Bagong Alyansang Makabayan told the SC that the DILG memorandum and the declaration that Confederation for Unity, Recognition and Advancement of Government Employees (COURAGE) and the Alliance of Concerned Teachers (ACT) are “communist terrorist group front organizations” is a prima facie (on its face) act of designation.

“Under the ATA, this can trigger grievous consequences to the concerned persons and organizations’ rights and liberties,” they told the court.

COURAGE is BAYAN’s co-petitioner in the pleading filed through the National Union of Peoples’ Lawyers.

On March 14, Rep. Ferdinand Gaite (Bayan Muna party-list) raised the alarm on the letter from DILG Assistant Secretary Alexander Macario ordering the agency's regional directors to make a list of COURAGE and ACT members in their areas.

The memorandum was later removed from the DILG website, the petitioners said, but department spokesperson Jonathan Malaya on March 16 confirmed the order to investigate and tally members of COURAGE.

The petitioners stressed that COURAGE and ACT, which have been relentlessly vilified, are accredited, registered and recognized as legal groups for government workers and for school teachers.

“The DILG memorandum is undeniable proof that the affiliate unions, federations and associations of COURAGE and ACT, as well as their individual members and officers are among the targets of the government’s vicious crackdown on dissent and activism under the Anti-Terrorism Act,” they said in a Manifestation electronically filed Monday.

Under the ATA, designated terrorists may have their bank accounts frozen. Suspected terrorists, based on probable cause as determined by and written authorization from the Anti-Terrorism Council, may also be detained without warrant up to 24 days.

The petitioners also noted that Calbayog, Samar police recently sent “letters of similar tenor” to the local court asking for lawyers representing CTG personalities in court. Prior to the memorandum, members of COURAGE and ACT were also red-tagged and arrested “for false criminal charges,” they added.

“The State, thus, committed acts essentially amounting to interference with exercise of the freedom of association and large-scale union-busting, which are proscribed under the 1987 Constitution and the international human rights law,” they added.

“The foregoing incidents remind us once again of the terror that the assailed law perpetuates. Indeed, the continued implementation of RA 11479 can only bring grim and imminent prospects of grave injustice and irreparable injury to Petitioners and the Filipino people,” the petitioners added.

The SC is currently waiting for the comment of the Office of the Solicitor General on recent pleadings filed reiterating petitioners’ prayer for temporary restraining order to stop the implementation of the law.

Oral arguments meanwhile will resume on April 6. Solicitor General Jose Calida is set to present the government’s defense of the law.