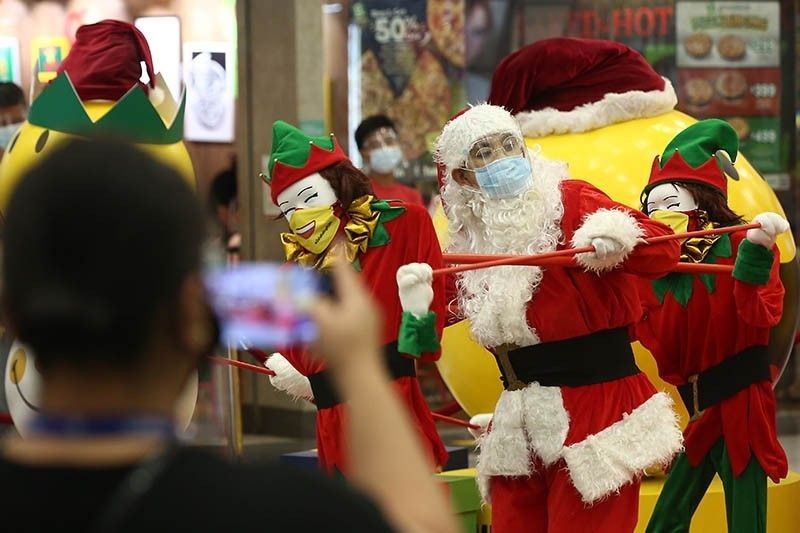 A man in Santa Claus costume dances with elf puppets around the SM City Masinag in Antipolo City on December 8, 2020.

MANILA, Philippines — While Filipinos are preparing to celebrate Christmas during a pandemic, at least two government hospitals in Metro Manila are bracing for a possible surge of coronavirus infections.

The Philippine General Hospital and the Lung Center of the Philippines—both designated as COVID-19 referral centers in the capital region—said they have prepared in advance for the possible spike in COVID-19 cases after seeing a decrease in the number of admitted patients in the past months.

“We are ready. We did not reduce the number of beds allocated for COVID-19 patients,” PGH spokesperson Dr. Jonas Del Rosario said in Filipino in an interview with TeleRadyo Monday.

Currently, only 97 of the 200 beds dedicated to COVID-19 patients in PGH are occupied.

Meanwhile, Lung Center of the Philippines has a 70-bed capacity for coronavirus cases, with 26 beds occupied now.

“We’re expecting that after the Christmas break, two or three weeks after that, if Filipinos won’t be careful, it will really increase. We are preparing for it,” Dr. Antonio Ramos, head of LCP’s administrative services, also told TeleRadyo.

While the two government hospitals are prepared for such event, they appealed to the public to continue following minimum health standards and avoid gatherings this holiday season.

“This is included in our appeal to the public: you can have exchange gifts but avoid eating together,” Ramos said in Filipino.

“We’re hoping there won’t be a surge that’s too high because we’re opening up our hospital to non-COVID patients whose numbers are increasing,” Del Rosario said.

In early August, heads of dozens of medical societies in the country called on President Rodrigo Duttye to place Mega Manila to strict community quarantine for two weeks to allow health workers to recover from exhaustion and to give the government time to recalibrate its strategies.

Duterte, though angered by their appeal, heeded their call and placed Metro Manila and provinces around it under a two-week modified enhanced community quarantine.

The Private Hospitals Association of the Philippines expressed worry over the lack of staff and funding should there be a spike in COVID-19 cases come January.

"The problem for hospitals right now is that if cases increase too much and the hopsital doesn't have enough resources," Dr. Jose Rene de Grano, PHAP president, told CNN Philippines Monday.

De Grano said there are not enough health workers to accommodate the possible surge in virus cases because some nurses have quit their jobs due to the risks posed by COVID-19, while others have left the country to work overseas.

He added that private hospitals are also facing funding woes. The PHAP president cited the “slight delay” in reimbursement made by the Philippine Health Insurance Corporation.

“Private hospitals are pleading for the reimbursements to be released immediately so we won't have difficulties with funding,” he said in Filipino.

The country’s reproduction rate—or the number of people who may be infected by a confirmed case—has increased to 1.06 this week, Guido David of the OCTA Research Team said in an interview with TeleRadyo. This may further rise to 1.2 by the end of the year.

Ideally, the reproduction number should be below one. The lowest reproduction rate recorded in the country was 0.66 on October 21.

“Our indicators are okay. What we’re trying to say is that cases are beginning to rise. Let us not allow that it will continue to rise,” David said.

The OCTA Research Group earlier projected that coronavirus infections could reach 480,000 by the end of 2020. — Gaea Katreena Cabico