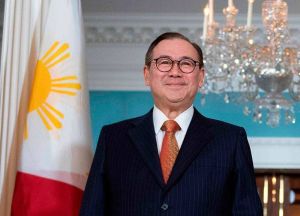 Speaking during the Department of Foreign Affairs' (DFA) Foundation Day, Locsin said, “The President had spoken. I carried out his instructions to the letter: oil and gas discussions are terminated completely. Nothing is pending; everything is over.”

He said both sides tried to negotiate for three years and got as far as constitutionally possible. However, another step forward would have risked a “constitutional crisis.”

“That explains the sudden pull-back on my part which unraveled three years of sincere hard work on the part of Wang Yi and me. We had both tried to go as far as we could — without renouncing China's aspiration on his part; and constitutional limitations on my part. I shut down the shop completely,” Locsin said.

He said that throughout the negotiations, the Philippines never surrendered even a particle of its sovereignty.

In 2018, Manila signed an agreement with Beijing to cooperate on oil and gas development as a way to benefit from the resource1s in the waterway.

Locsin said it now falls on the next administration's shoulders to protect the Philippine sovereignty “all the way to the wire.”

“The irreducible template of what is constitutionally possible is there in black and white. Surrender of any portion of Philippine sovereignty is not an option,” he said.

President-elect Ferdinand “Bongbong” Marcos Jr. earlier said he would assert the Philippines' rights over the WPS and talk to China “consistently with a firm voice.”

“Our sovereignty is sacred and we will not compromise it in any way,” Marcos had told reporters. “We will not allow a single square millimeter of our maritime coastal rights to be trampled upon.”

Marcos also said he would use the 2016 arbitral ruling to assert Philippine territorial rights.

He added that he will engage not only China but the Philippines' Southeast Asian neighbors in reaching a peaceful settlement of maritime rows.

The Philippines claims parts of the South China Sea within its exclusive economic zone and calls it the WPS.

President Rodrigo Duterte, who has taken a softer approach to Beijing's claims over most of the sea, allowed Philippine companies to resume drilling off the country in October 2020.

It was hoped that his decision to lift a 2014 moratorium would fast-track the talks with Beijing.

The Chinese embassy in Manila did not respond to a request for comment.

Locsin's statement confirmed that the two sides had reached a deadlock, said Jay Batongbacal, director of the University of the Philippines' Institute for Maritime Affairs and Law of the Sea.

Equity sharing should also favor the Philippines, he added.

Tensions between Manila and Beijing over the waterway have intensified in the final year of Duterte's term in office.

Last month, Manila said it summoned a senior official of the Chinese embassy on April 13 to protest the harassment of a Taiwan marine research vessel with Filipino scientists on board by a Chinese coast guard ship.