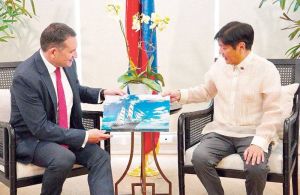 NORWAY is open to expanding its investments in renewable energy with the Philippines, particularly offshore wind power, under the administration of President-elect Ferdinand “Bongbong” Marcos Jr., its envoy said Wednesday.

This commitment was made during the meeting of Norwegian Ambassador to the Philippines Bjorn Jahnsen with Marcos at the latter's headquarters in Mandaluyong City.

Speaking to reporters after the meeting, Jahnsen said he mentioned to Marcos the offshore wind energy that could provide job opportunities for Filipinos.

The envoy cited a World Bank study as he talked about the opportunities for developing the renewable energy sector in the Philippines.

If the Philippines successfully develops the sector, Jahnsen said some 50,000 “good-paying” jobs may be created in the country.

However, the diplomat said this may need an adjustment in the country's current policies.

“The World Bank talks about up to 50,000 jobs, good-paying jobs for Filipinos if you are successful in developing this new sector,” Jahnsen said.

“That requires some adjustments and policies on the Filipino side. For instance, foreign companies should be able to own a majority of the equity in these types of investments as they often are investments with several billions of dollars and foreign investors would like to have a certainty of having a majority stake in their investment,” he added.

Offshore wind, the envoy said, is “the best wind resource1 in the Philippines,” adding that Norway has been developing this project.

The Norwegian Embassy in Manila has said that Norway is a world-leading player in renewable energy and is a committed partner to achieve the Philippines' goal of 75 percent reduction in greenhouse gas emissions from a 2020 baseline by 2030.

“This is a great opportunity for the Philippines. As you know, the country is growing in economy and energy consumption is increasing, so offshore wind is really one of your best bets for the future,” Jahnsen said.

Aside from energy, Jahnsen and Marcos also discussed maritime issues.

He said that Norwegian tall ship Statsraad Lehmkuhl will dock in Manila in October this year.

The envoy invited Marcos to attend and speak at the October conference about renewable energy.

The two-day event will be called the “Norway-Philippines Maritime and Energy Conference — Creating Currents Together” where world-leading Norwegian and Filipino companies from the maritime and energy sectors will present solutions to pressing issues.

“I would say one of the main topics is that Norway is bringing a sailing boat to the Philippines in October — a 100-year-old sailing boat,” Jahnsen said.

“It's part of an expedition around the world to really put focus on climate change, sustainability of the oceans, plastics in the ocean and this vessel will come to the Philippines, as I said, in October,” he added.

Marcos was also earlier invited to attend the 2022 United Nations Climate Change Conference — also known as COP27 — to be held in Egypt in November this year.