PH, US to fortify economic alliance 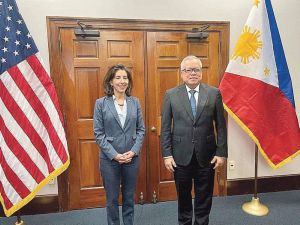 THE Philippines and the United States have agreed to strengthen their economic partnership and cooperation in a meeting of the two nations' representatives in Washington, D.C.

Trade Secretary Ramon Lopez and US Commerce Secretary Gina Raimondo discussed trade issues at the sidelines of the High-Level Diplomatic Reception for Government Officials and Business Leaders on April 19, 2022.

He expressed the Philippines' intent to join the Indo-Pacific Economic Framework (IPEF), an American initiative seen by many as an effort by the US to preserve its leadership and presence in the region.

Raimondo said that the US is keen on including the Philippines in the IPEF.

Lopez also asked the US to consider the Philippines as a supplier of critical minerals, saying that the country is the biggest source1 of nickel, accounting for about 31 percent of the total global exports.

“The Philippines has vast resource1s of green metals such as nickel and cobalt, which are key inputs for battery manufacturing. The country is also abundant in copper, which is likewise an important input for the production and manufacture of technology products,” he said.

Lopez added that the economic policy reforms initiated by the Duterte administration were expected to improve the business environment in the country and attract more foreign investors.

“The growth in data centers will also lead to more renewable energy demand since RE is the required source1 of energy for these facilities. The government reforms put in place by the Duterte administration will support building stronger trade and investment ties with the US,” he said.

Raimondo replied that such reforms, especially those that liberalized public services and retail trade, would definitely attract more US investors.

In 2021, the US was the Philippines' third-largest trading partner, top export market and fifth-largest import supplier.

Department of Trade and Industry data shows that total bilateral trade with the US amounted to $19.6 billion, with the Philippines enjoying a modest trade surplus.

The US was also the Philippines' fifth-largest investor in the same year with approved investments amounting to $77.64 million.