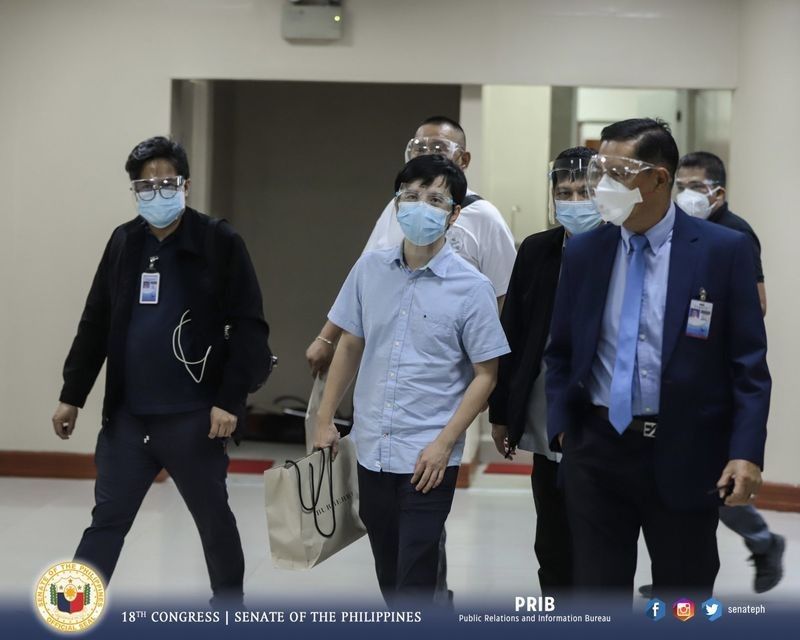 MANILA, Philippines — An executive of the controversial Pharmally Pharmaceutical Corp. was detained at the Senate on Tuesday amid continued hearings into its large and anomalous pandemic contracts with the government.

Senate panel to subpoena contracts with Pharmally outside of COA report

He will remain there until the Blue Ribbon Committee resumes its hearing on reported deficiencies in pandemic spending on Friday, the office of the panel's chairman, Sen. Richard Gordon, confirmed to Philstar.com.

Gordon on Tuesday was again frustrated by Ong's evasive answers and his failure to submit documents subpoenaed by the committee.

"If you persist on lying, there are [Senate security] officers there. Because you are lying to us all the time, we will have you brought…and detained at the Senate. That is not an idle threat," he told Ong. Senate President Vicente Sotto III soon after noted that a prior arrest warrant against Ong still stands.

The arrest warrant against him was carried out by Senate security as early as Sept. 10 but he was placed under house arrest because he contracted COVID-19.

Ong was first cited in contempt and ordered arrested by the panel as early as September 7 along with other executives of Pharmally and former presidential economic adviser Michael Yang for ducking subpoenas from the panel to attend its hearings.

Facing arrest, they finally surfaced during a September 10 hearing where Ong was cited in contempt and ordered arrested anew for his evasive answers when questioned about Yang's connection to the firm.

Ong had earlier disclosed that he was infected with COVID-19 so senators placed him under house arrest instead of detaining him elsewhere.

Pharmally has been under intense scrutiny over its bagging of pandemic contracts with the Department of Budget and Management's procurement service for medical supplies worth at least P8.68 billion despite its recent incorporation in 2019 with a paid-up capital of just P625,000. Senators have borne out that the total contracts awarded by the PS-DBM to Pharmally could actually be as high as P12 billion.

The medical supplies it sold to the government, which it purchased from other suppliers, have also been criticized as overpriced.