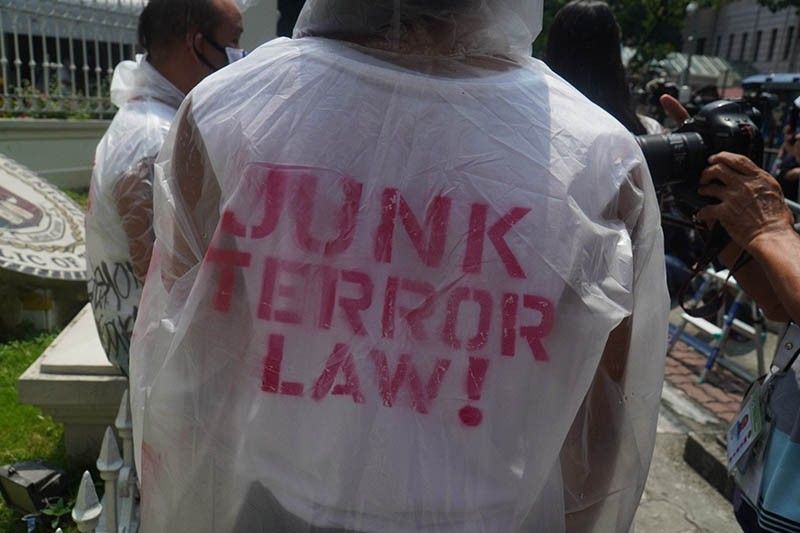 MANILA, Philippines — As the Supreme Court continues its debates on the petitions against the Anti-Terrorism Act of 2020, Philippine journalists join the call to strike down the law for its chilling effect on media practice.

The Freedom for Media, Freedom for All network, and 17 news organizations and 79 journalists, on Monday lent their voices to the growing opposition to the anti-terrorism law, saying its provisions “trample upon fundamental freedoms, including the freedom of the press.”

“The ATA will not succeed in reducing the threat of terrorism with over-reaching prohibitions on expressive as well as political freedoms. It will reduce this country to a field of submissive and unquestioning individuals, to be herded like by sheep by the police and military,” they said.

The FMFA network is composed of the Center for Media Freedom and Responsibility, MindaNews, National Union of Journalists of the Philippines, Philippine Center for Investigative Journalism and Philippine Press Institute.

The media coalition noted that Section 9 of the ATA, under inciting to terrorism, proscribes speech, proclamations, writings, emblems and banners and imposes a 12-year imprisonment.

“As the law fails to provide a clear definition of terrorism and is vague about what constitutes acts of terrorism, Section 9 could make media practitioners vulnerable to wrongful charges and arrests, producing a chilling effect on all media practice,” they said.

Journalists are among the petitioners against the anti-terrorism law. In their plea, assisted by the Free Legal Assistance Group, they told the court that the law may drive them to self-censorship due to fear of being labelled as terrorists.

They would have to toe the line not to write a story that may be misconstrued for intending to cause injury or endanger a person’s life or destruction to property or intimidate the public—all qualifiers of terrorist acts.

Due to the “sheer amount of guesswork, qualification, mincing and moderation,” a good number of journalists may opt to not write at all, the petitioners said.

FMFA also pointed out that the government’s claims of assurances fly in the face of news organizations and journalists’ experience of being red-tagged and branded as terrorists.

“With the government’s anti-insurgency campaign causing a rise in killings of activists, we fear for the safety of our colleagues,” FMFA said.

“Many of us have seen how efforts to go after ‘enemies of the people’ have led to zealous securitization of the government’s response to the problems of the country,” they added.

The petitioners, assisted by rights lawyer Evalyn Ursua, also said Section 9 should be struck down for being unconstitutional as it involve content-based restraint on speech and expression—and cannot pass the clear and present danger test.

FMFA called on the government to uphold the freedom of the press and protect the rights and safety of journalists at all times. “We reject the Anti-Terrorism Act,” they also said.

The SC will resume its oral arguments on Tuesday. Justices will continue their interpellation of lawyers from the Office of the Solicitor General.

President Rodrigo Duterte signed the Anti-Terrorism Law on July 3 despite opposition from rights groups and civil society groups that it could be used to stifle human rights.

A petition against the law has been filed at the Supreme Court and other groups are preparing pleadings of their own.

Follow this page for updates. Photo courtesy of The STAR/Michael Varcas

Solicitor General Jose Calida tells the Supreme Court that the Philippines must have an Anti-Terrorism Act because of international obligations.

Calida says "supervening events warrant ouright dismissal of petitions." He notes there are already cases involving ATA, such as case against farmers Japer Gurung and Junior Ramos, and three individuals in Negros Occidental.

He says petitioners do not have standing to question the law since they are not directly affected by it.

Oral arguments on petitions against the Anti-Terrorism Act will resume on April 27 at 2:30 p.m..

According to a Supreme Court advisory, the arguments will be carried out through videoconferencing due to the pandemic.

Oral arguments on the Anti-Terrorism Act of 2020 scheduled on March 23 is suspended due to the "alarming increase of COVID cases."

The oral arguments on the petitions against the controversial Anti-Terrorism Act of 2020 will resume on March 23.

The Supreme Court announces that the oral arguments scheduled on March 16 is suspended.

Oral arguments on the Anti-Terrorism Act, initially pushed back to March 16, are suspended to give way to disinfection of Supreme Court buildings and offices.

Chief Justice Diosdado M. Peralta extends work suspension in the Supreme Court until March 16, 2021 as the different buildings and offices continue to be disinfected; Oral Arguments for G.R. No. 252578, et al. on March 16, 2021 is suspended. pic.twitter.com/jPVv93f1BK