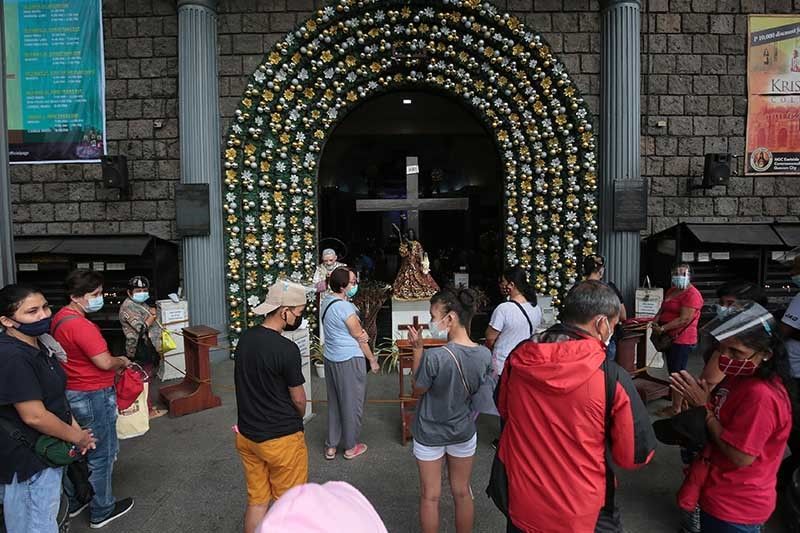 Church goers at St. Peter Church offer peace during a Mass on December 8, 2020, which marks the feast of the Immaculate Conception of Mary.

Batangas had the most number of new COVID-19 infections with 71. It was followed by Quezon City with 70, Davao del Norte with 64, Benguet with 59 and Quezon province with 57.

The DOH also logged 156 additional recoveries, bringing the total number of COVID-19 survivors to 408,942 or 92.1% of the country’s confirmed cases.

But seven more patients succumbed to the dreaded disease. Death toll stood at 8,677.

Wednesday's figure did not include results from 13 testing laboratories that failed to submit their data on time.

In its latest report on the COVID-19 situation in the country, the OCTA Research Group said national figures are declining. Increases in new cases per day, however, were observed in Benguet, Isabela, Bataan, Leyte, Ilocos Norte, Pangasinan and Cagayan.

"More concerning were provinces that also continue to have high positivity rates such as Quezon, Benguet, Isabela and Cagayan for the period from November 30 to December 6," OCTA Research Team said, noting this may be due to a lag in infections as a result of the recent disasters.

The researchers said the increases in additional cases are “largely cases of community transmission exacerbated by significant rise in mobility within and among provinces” as a result of the opening up of the economy.

“Furthermore, the deteriorating compliance with the minimum health standard by some citizens due to pandemic fatigue and/or the failure of local government units to monitor and enforce general community quarantine regulations have also contributed to spikes, especially in metropolitan areas,” they added.

Globally, the new coronavirus has infected nearly 68.2 million individuals, with over 1.5 million deaths.