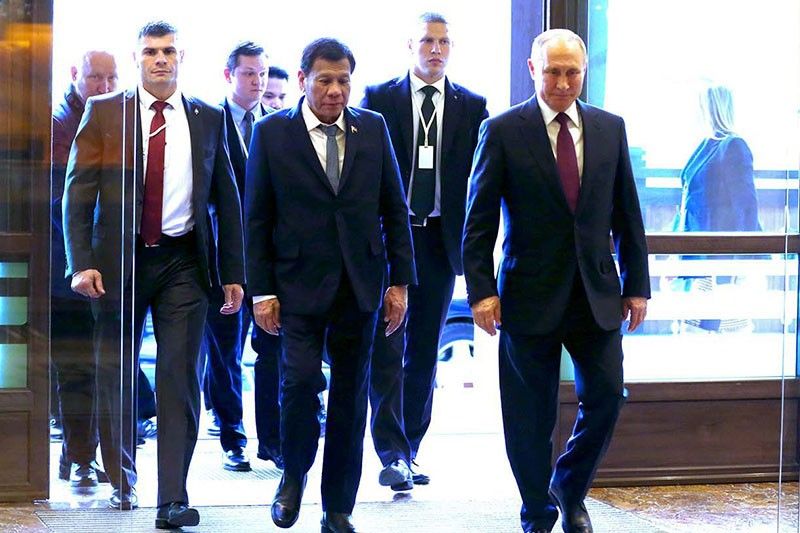 MANILA, Philippines — The Philippines and Russia vowed to strengthen their bilateral ties as they greeted each other during the celebration of their national holidays last weekend.

In his letter to President Rodrigo Duterte, Russian President Vladimir Putin congratulated the Philippines as it commemorated the 123rd anniversary of its independence and described the relations between Manila and Moscow as "traditionally friendly."


"I am confident that by joining efforts, we will secure further development of constructive bilateral dialogue, fruitful cooperation in different fields, as well as partnership to respond to the pressing international challenges," Putin said in the letter, which was released by Malacañang to the media on Saturday night.

"It fully meets the interests of our two nations and goes in line with strengthening security and stability in the Asia-Pacific Region. I sincerely wish you good health and every success, and to the people of the Philippines well being and prosperity," he added.

Earlier that day, Malacañang made public Duterte's message for the celebration of Russia Day.

"I warmly congratulate Your Excellency and the people of the Russian Federation on the occasion of Russia Day. On this day of national unity and celebration, let me convey the Filipino people's best wishes for the continued success and prosperity of your great nation," Duterte said.

"I am confident that our strong relations will continue to thrive in the years ahead as we deepen cooperation in more areas of mutual interest, including in our common fight against the COVID-19 pandemic," he added.

Duterte noted that the Philippines and Russia had marked 45 years of "warm and fruitful ties" this year.

"It was my great pleasure to have commemorated this special milestone with Your Excellency on the 2nd of June," the Philippine leader said.

Last April, Duterte and Putin discussed the COVID-19 pandemic and defense cooperation during a 30-minute phone conversation. Earlier this month, the two leaders held another telesummit to commemorate the 45th anniversary of the diplomatic ties between their countries.

A Malacañang statement issued after the teleconference said Putin has vowed to increase the volume of deliveries of Sputnik V COVID-19 vaccines to the Philippines.