MANILA, Philippines — The Philippines continued to be under "moderate" risk classification for COVID-19 as cases in most areas begin to decline, the Department of Health said Monday.

Authorities first downgraded the country's status in the last week of September, after it raised "high" risk classification in August amid the more infectious Delta variant.

In a briefing, Health Undersecretary Maria Rosario Vergeire said they have observed a -21% growth rate in the last two weeks.

ADAR refers to the number of cases in an area over a two-week period divided by the population there. 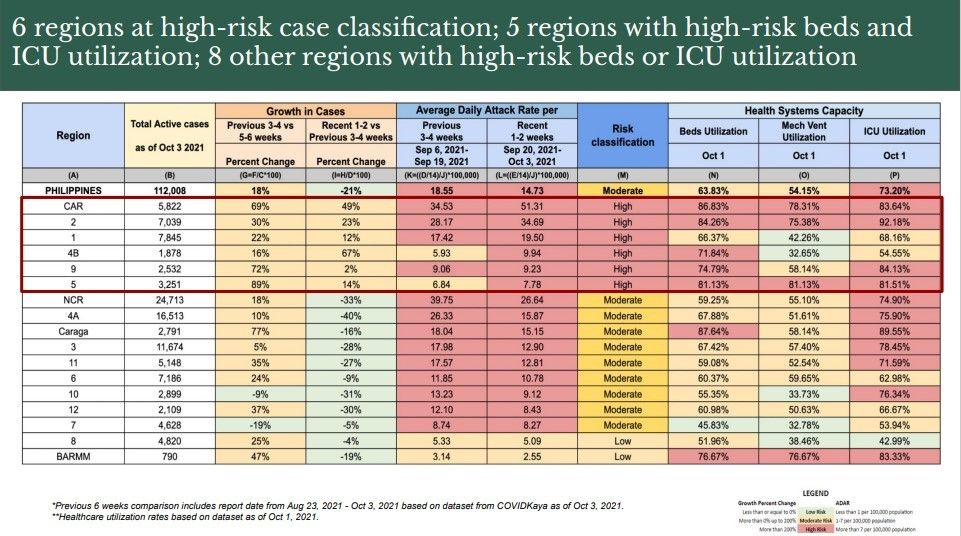 On the national level, the health official reported, too, that hospital bed utilization rate is at 63.83%, while mechanical ventilator utilization is at 54.15%.

Both are at moderate level, but the country's ICU utilization has stayed at high risk at 73.20%.

"Only minimal improvements were seen in healthcare utilization as national and majority of regions remain at high risk health systems capacity," Vergeire said.

The capital region is under moderate risk status. It posted a -33% growth rate in the last two weeks.

Vergeire said Metro Manila has shown a "slow downward trend," with daily cases peaking at 5,714 from September 5 to 11.

In its healthcare capacity, the official said bed utilization is at 59.25% and mechanical ventilators at 55.10% — both under moderate level.

Its ICU bed capacity, meanwhile, is at 74.90% indicating at high risk or critical level.

The Philippines nears 2.6 million total coronavirus infections, with 112,008 active cases as of October 3.

Share
Previous Julian Ongpin ordered to appear before NBI over Bree Jonson death
Next 5,000 travellers who defied hotel quarantine rules got big fines, but no sign of fines in Alberta