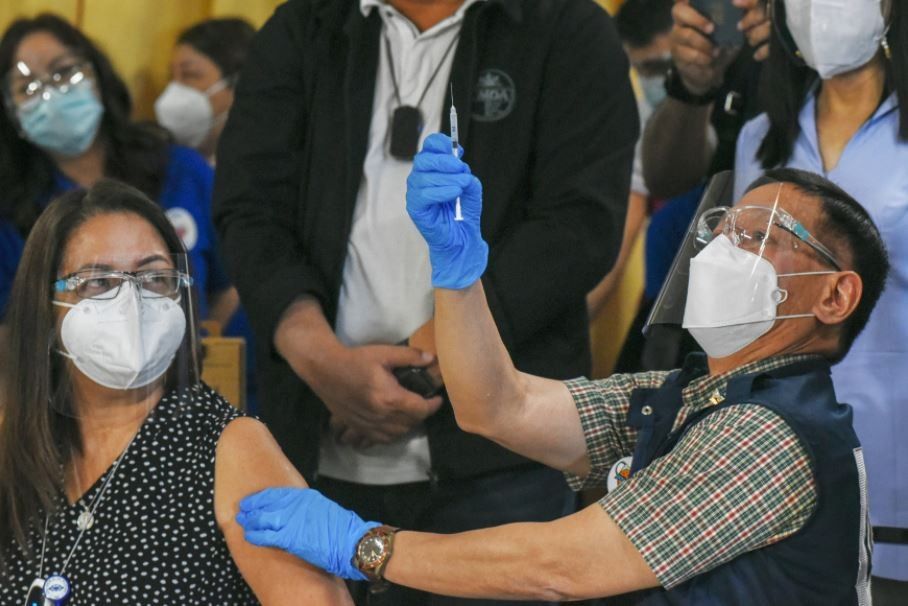 Health Secretary Francisco Duque III (R) administers the Sinovac vaccine against the Covid-19 coronanavirus disease to Eileen Aniceto, Medical Doctor of the Lung Center of the Philippines, in Quezon City on March 1, 2021.

AstraZeneca's doses under the global initiative are set to arrive in the Philippines on Thursday night in what would boost the country's vaccination efforts that began in March 1 after figuring in delays.

But Dr. Rabindra Abeyasinghe, the WHO's representative to the country, stressed that government's priority list should be followed, particularly health workers and the most vulnerable to the COVID-19.

"To access these vaccines and then the remainder that will be coming to the Philippines before the end of the year, [it] needs to demonstrate that they can first rollout the vaccines in an efficient manner," he said in a briefing.

Some 4.58 million doses of AstraZeneca and 117,000 doses of Pfizer are allocated for the country, with an initial delivery of 487,200 doses of the British-Swedish drugmaker arriving on Thursday night.

Abeyasinghe said a proper rollout will also include minimizing wastage of the jabs, as well as ensuring that storage management is done efficently.

Members of the Presidential Security Group were actually among the first in the country to be vaccinated against the coronavirus. They were vaccinated with unauthorized and smuggled Sinopharm vaccines in late 2020, President Rodrigo Duterte himself disclosed last December.

The innoculation mess drew widespread criticism and calls for accountability, but local regulators said their investigation has hit a "blank wall" with no cooperation from the PSG. A similar probe into the use of the same smuggled vaccines by columnist Mon Tulfo, "Cabinet-level" officials and a senator are similarly likely to go nowhere.

Medical experts warned that failing to hold someone responsible for the unauthorized vaccinations could set a bad precedent for bringing in medicines or other vaccines into the country.

They also said that justifying the apparent disregard for the law could undermine vaccination efforts in the country, at a time when public mistrust of the jabs has remained high.

Health workers are at the top of government's priority list to get the jabs. But only days into vaccinations, incidents of some officials receiving the jabs despite not being on the list have drawn flak.

Later on sought for comment, presidential spokesperson in a briefing admitted "breaches" into the vaccination program.

"Courtesy of these three incidents, everyone should now know that the first vaccines are only for medical frontliners," he said partly in Filipino. "We are not perfect in carrying out protocols. We had a few breaches."

No local transmission of Omicron BA.2.12.1 yet: DOH expert

NCR, other areas remain Alert Level 1 up to May 31