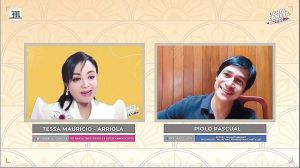 PIOLO Pascual — “Papa P” to his legions of adoring fans — may be this larger-than-life figure in front of the camera, but what he has done behind it did not quite measure up to all the acting awards he has won.

The “ultimate leading man” was someone who always had his hands — and wallet — open for those in need but shied away from openly talking about his philanthropic efforts. For him, what mattered was that he payed it forward.

“I don't want to grow old and regret that I did not do anything,” Piolo said in an interview with The Manila Times' “Lights, Camera, Boto!” The Chat Show Edition.

He said his passion and drive to help underserved and underdeveloped communities grew deeper when he decided to “slow down” in his property in Mabini, Batangas where he had set up another residence and businesses.

Living the rural life had rubbed off so positively on him that he now proudly called himself probinsyano (one of the country folk).

“When the pandemic hit, that's when I learned to slow down and appreciate life more,” the showbiz A-lister shared.

It was during the peak of the coronavirus pandemic that he felt the “compulsion from the heart” to do something for the locals, hardest hit by the crisis.

With the help of his mother and sister, Piolo opened several small businesses to help the unemployed in their community get back on their feet.

“We all had to fend for ourselves in the pandemic, but even before then, the main component why I had always planned to do businesses in Batangas was because I found out that there are still many indigenous peoples in the rural areas, who are not getting the proper education,” Pascual said.

“When I put up my foundation, I decided that the best way I can help is to make sure that these children would grow up learning [in order] that they can access the same opportunity we, fortunately, had and genuinely have a shot at a better future,” Pascual added.

It was through this vision that his path crossed with the Ang Probinsyano party-list. It didn't take long for Piolo to give his support to the group, led by incumbent First District Rep. Alfred “Apid” de los Santos, owing to the fact that “they delivered.” Interestingly, this was the first time that he had publicly endorsed a political figure.

“It's a big step for me. But advocating their programs is just like advocating mine because I saw how in three years' time, when I joined them [for the group's proclamation] in Zamboanga, that they've done so much just in that one place. I saw all their programs in motion, all the livelihood projects they initiated and all the important infrastructure they built, and it was obvious to me that this is one group of young people who deliver,” Pascual continued.

“I wanted to stand up for something I believe in, and I want to do it now. We attracted each other because of our love for education [in order] that more and more Filipinos can achieve a better future. We don't want to take them away from their areas, but we want to give them better choices. So, we start with education and move on to rural development, providing jobs, better roads and access for people to connect and modernize,” he said.

He added that he finally spoke out mainly because of his desire for the youth “to better understand our choices in life.” By advocating the Ang Probinsyano party-list and its plans and for marginalized Filipinos, Pascual hoped the elections would trigger sweeping, positive changes for the country and the people.

“It's now or never. It's a very hostile world we live in. So, it's time for us to think really hard. We don't just need an iron fist; we need compassionate leaders, who would embrace our needs and really do something about it,” he added.

For Pascual: “This is our chance to speak up. We need to use that voice.”