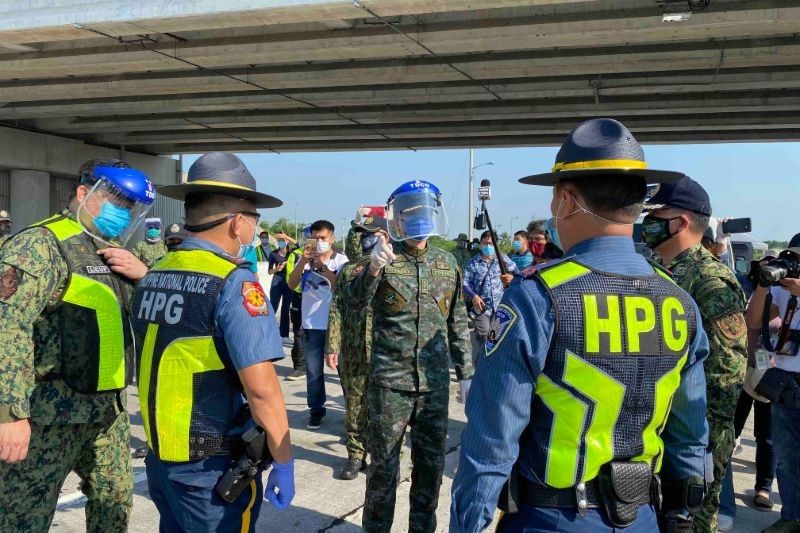 Photo shows members of the Highway Patrol Group, which is part of the enforcement arm of the Inter-Agency Task Force on Emerging Infectious Diseases, enforcing quarantine rules.

MANILA, Philippines — The national police is looking at 24/7 coronavirus testing for its personnel and the release of results within 24 hours, it said Sunday.

In a statement, Police Lt. Gen. Guillermo Eleazar, who leads the Philippine National Police's Administrative Support for COVID-19 Task Force, said that the PNP would initiate mass testing within the agency anew in a bid to prevent coronavirus transmission within its ranks.

“We are now coming up with a protocol to test as many of our personnel. Priority areas of these aggressive testing are Metro Manila and other areas with high COVID-19 cases,” said Eleazar.

“Part of this protocol is conduct regular tests on our personnel who are assigned as frontliners and those who are conducting regular law enforcement operations such as personnel of our anti-illegal drugs forces and other units who are on the field running after criminal elements,” he added.

Eleazar said that while the PNP has two molecular laboratories based at the national headquarters at Camp Crame in Quezon City that could accommodate 420 tests a day, there were cases that the number of PNP personnel being tested did not reach 100.

“We are also continuously improving our COVID-19 testing database and that is the reason why those who were tested in our laboratories would get the result of the swab test through SMS,” said Eleazar.

President Rodrigo Duterte's decision to put the PNP and the military in-charge of imposing the COVID-19 lockdown he ordered in March had earned criticism from groups as well as those in the medical field that the government is militarizing its response to a public health crisis.

Despite a relatively high recovery rate in the PNP, coronavirus infections among its personnel have only grown since then, with the PNP Health Service recording another 54 cases as of its latest case bulletin on Saturday evening.

Based on the latest PNP data, a total of 8,559 PNP personnel were infected by the coronavirus with 27 deaths. A total of 8,504 were able to recover while there are 478 active cases.

In a bid to revive the economy, the Duterte government began steadily easing restrictions in and around Metro Manila starting June, such as increasing capacity in business establishments, churches as well as in public transport.

Consequently, cops were ordered to intensify police visibility, especially in business districts to help local governments ensure that people are complying with health protocols set by government in public. Eleazar himself blamed the increases in coronavirus cases on "hard-headed" Filipinos who did not follow protocols.

COVID-19 in the Philippines

Police leadership has long acknowledged the merits of expanded mass testing, though Duterte seemed to take a while to catch up, saying at a televised briefing in Filipino: "In all honesty, what's important is, I realize now, it’s the testing."

As of the health department's latest update on Sunday afternoon, over 449,000 coronavirus infections have been recorded in the country since the virus first emerged in December of 2019.

Over half a year into the coronavirus-induced lockdowns, the national government is still wrestling with curbing the spread of the pathogen, with the Philippines still being under the longest recorded quarantine in the world after 271 days of community quarantine.

President Rodrigo Duterte continues to assert that acquiring a vaccine to achieve herd immunity is the only way out for the Philippines moving forward.

Until then, however, daily additions in coronavirus cases are still being reported in the thousands—marking the only country in the Western Pacific Region of the World Health Organization to still be doing so.

Around the world, over 72 million coronavirus cases have been recorded, leading to around 1.6 million deaths, according to Worldometers.

— with a report from Christian Deiparine