PNP says no changes in enforcement under MECQ 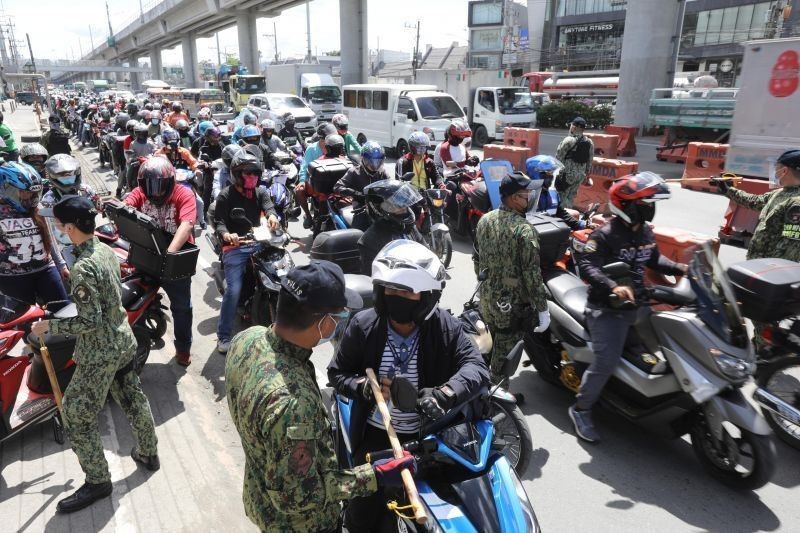 MANILA, Philippines — With the modified enhanced community quarantine announced sans clear guidelines, the Philippine National Police is sticking to what it has been doing until further notice, it said Sunday.

"Nothing is going to change in our checkpoints. The usual ECQ and MECQ violations are not wearing face shields and masks, mass gathering, physical distancing, and provisions of RA 11332. That's it. Whatever the violations, the chief has since directed our commanders in the NCR Plus bubble not to arrest the violators," Police Brig. Gen. Ildebrandi Usana told Philstar.com in Filipino in a text message.

Related Stories
‘NCR Plus’ under Modified ECQ until April 30
DOH logs 11,681 new COVID-19 cases as ‘NCR Plus’ shifts to MECQ

RA 11332 is the Mandatory Reporting of Notifiable Diseases and Health Events of Public Health Concern Act, a law that police have often used to arrest people over supposed violations.

This comes after the government's coronavirus task force opted to revert Metro Manila and its surrounding provinces to a more relaxed Modified Enhanced Community Quarantine on Sunday afternoon.

To recall, more than 9,000 police personnel have been deployed to man the exactly 1,106 quarantine control points in Metro Manila, Bulacan, Cavite, Laguna, and Rizal to implement health protocols.

According to Usana, the same marching orders for police remain, including:

Asked about changes to the uniform curfew, Usana said that deployed forces would continue to enforce the 6 p.m. to 5 a.m. curfew until further notice.

"If one commits production of fake RT-PCR results or in possession of fake results in his name, he will be arrested for violation and falsification of public documents and/or Republic Act No. 11332," Usana also said.

PNP data show that more than 37,000 in the so-called NCR+ bubble have either been warned, fined or subject to community service for supposed quarantine violations since March 29.

Exactly 390 days have passed since the first ECQ was hoisted, and the Philippines is still under the world's longest quarantine.