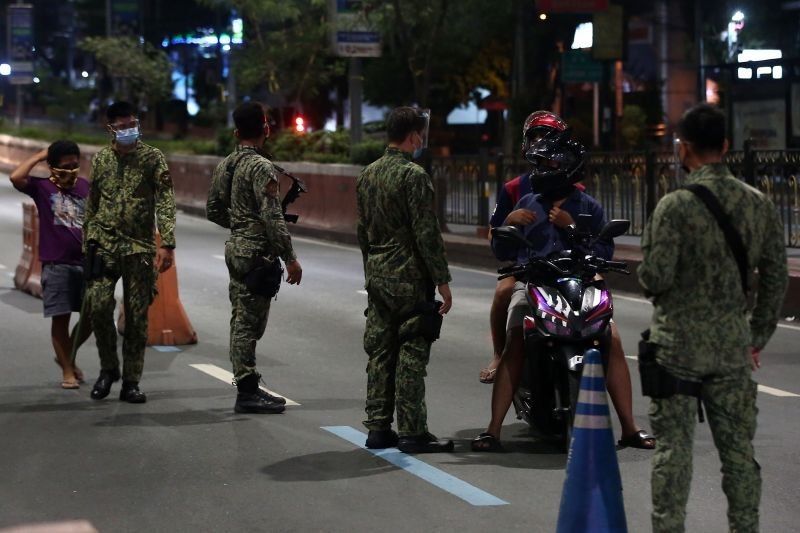 MANILA, Philippines — Contrary to one barangay tanod who seemed to think otherwise, the Philippine National Police asserted Thursday that food deliveries such as lugaw, or porridge, are essential goods amid the enhanced community quarantine.

To recall, two food delivery-related incidents involving power-tripping enforcers were recorded over the week: one of a Grab rider who was blocked by a tanod who claimed that lugaw wasn't an essential good and was therefore prohibited, and another of a 21-year-old student arrested for leaving his house to pick up his dinner.

In another instance, a cyclist was detained at a Quezon City checkpoint for not wearing a bicycle helmet. She said cops screamed at her to delete her videos after she started documenting the incident.

"The position of the PNP is that any kind of food that is legitimately delivered upon orders by residents during the period of ECQ in the NCR Bubble is considered as part of essential goods," Police Brig. Gen. Brandi Usana, PNP spokesperson, said in a statement sent to reporters.

"We say again, unless for any other reason in violation of law, the delivery of food to a requesting party on quarantine at their residence is essential and must not be subject of issuance of LGU-sanctioned ticket done within the NCR Bubble. For any complaint by the aggrieved person, please seek assistance from the nearest police station for appropriate action."

Sen. Risa Hontiveros in a statement Wednesday night called on the Department of Interior and Local Government, under which the PNP is an attached bureau, to act on the cases of what she said was heavy-handed enforcement by barangay watchmen.

Asked what residents should do when they feel harassed by enforcers, Usana told Philstar.com in a phone call that they could call on the cops in the area—some of whom have themselves been accused of overaggressive enforcement—to serve as intermediaries.

"They might as well call the attention of the police… We are not familiar with the mechanisms, but there should be considerations if they are able to validate that they are delivery riders," he said, adding that the PNP was also considering that tanods may not have been properly informed on what constitutes essential goods.

"We'll just talk with the barangays about it. We've already made our stand clear on our end. Anyway, this is not something that is happening all over, perhaps the tanod was just overzealous when holding the rider back… but riders don't have to react more than enough. They just follow the LGU ordinances but if there are excesses in the supposed demeanor of barangay tanods while dealing with them, these drivers can seek assistance from the police and file their complaint if necessary."

He added that all residents were permitted to record videos to document similar instances, contrary to the claims of officers of the Quezon City Police District.

"Anyone can have that right to make use of the video as regards to the instances, nobody is going to stop them…if they feel there were violations it would be better if this is covered by the video from the parties concerned," the PNP spokesperson said.

Philstar.com sought comment from Police Brig. Gen. Danilo Macerin, QCPD director, but he has not responded as of this post.