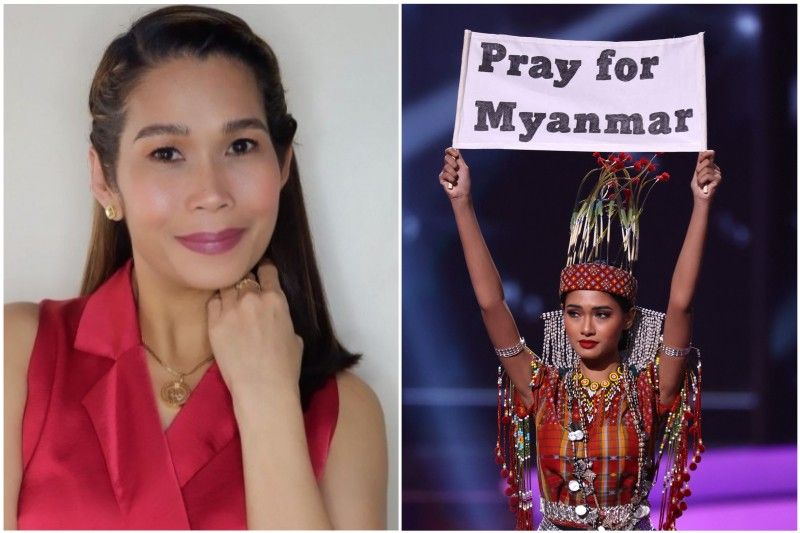 MANILA, Philippines — The 69th Miss Universe competition may have been culminated but Miss Universe Myanmar 2020 Thuzar Wint Lwin is not yet ready to fly home to her beloved country.

The military junta that replaced her government has issued a warrant for her arrest.

Like her compatriot Han Lay, who also received a similar warrant after competing at the Miss Grand International 2020 in Bangkok, for being outspoken, she, too, has pushed for democratic reforms in their country. The civil disturbance has displaced over 250,000 of its citizens.

Thuzar eluded the border patrol by craftily wearing a well-placed hoodie and dark sunglasses to hide her identity. En route to her departure for the US, she mailed her costume and evening gown through an international courier company. Unfortunately, all these never got to her.

The Chin (Sino-Tibetan) community in the States helped in hastily recreating her lost costume. Called "Fearless Empress," the replacement costume won the Best National Costume award. During the NatCos presentation, Thuzar brought a placard bearing the message, "Please Pray for Myanmar." Thuzar's good showing at the preliminaries made her part of the Top 21 semifinalists.

When Thuzar sent out a distress call for things she needed for the prelims and final show, one of those who heeded her plea was LA-based Filipino fashion designer Kirsten Regalado. Now, another Filipina has offered her home as temporary residence 'til her country's crisis is over.

Thuzar was deeply moved by these shower of support from Filipinos, whether they be pageant fans or not. Despite the standing warrant, she is firm and active in her activist's stance. It was reported earlier that Thuzar is still not sure where to go next, after her Miss Universe journey ended.

The US Treasury slapped sanctions on 16 senior Myanmar officials and family members Monday, citing their support for the government's "violent and lethal attacks" against the country's pro-democracy movement.

Among those placed on the Treasury's blacklist were four members of the military junta's State Administration Council, seven ministers, the chairman of the military-controlled election commission, and the governor of the Central Bank of Myanmar.

Three others on the lists were children of members of the State Administration Council who had been sanctioned earlier in the wake of the February 1 coup overthrowing the elected government.

Since then the country has experienced protests and strikes which have been put down with force, leaving close to 800 dead, according to a local monitoring group.

Myanmar's military regime "is violently repressing the pro-democracy movement in the country and is responsible for the ongoing violent and lethal attacks against the people of Burma, including the killing of children," the Treasury said in a statement.

The Treasury said that Canada and Britain were also announcing similar sanctions on members of the junta.

Since February the United States and other Western countries have steadily added the leading members of the military regime as well as state enterprises which fund it to its sanctions list to pressure the generals to return to democracy.

The sanctions aim to lock them out of the global trading and financial system by banning US individuals and companies, including banks with US branches, from doing business with them.

The sanctions also block any assets the individuals may have held under US jurisdiction.

Myanmar has been in uproar since the military ousted civilian leader Aung San Suu Kyi on February, triggering a massive uprising which authorities have sought to quell with lethal force.

At least 796 people have been killed by security forces since the coup, according to a local monitoring group, while nearly 4,000 people are behind bars.

Despite the pressure the junta continues to hold power and has not given ground to the protestors.

On Sunday an anti-junta defence force in the western state of Chin said six opposition members had been killed after days of clashes.

Adding to the international pressure on the country, on Tuesday the UN General Assembly will weigh a draft non-binding resolution calling for "an immediate suspension" of the transfer of weapons to the Myanmar junta.

The resolution calls for "an immediate suspension of the direct and indirect supply, sale, or transfer of all weapons, munitions, and other military-related equipment to Myanmar."

Meanwhile Myanmar's contestant in the Miss Universe contest, which ended Sunday in Florida, used the stage to get out her own message on the violence.

"Our people are dying and being shot by the military every day," she said during her biographical video, which showed photos of her taking part in the anti-coup protests.

On Thursday she took the best national costume award as she held up a sign reading "Pray for Myanmar." — Reports from Agence France-Presse