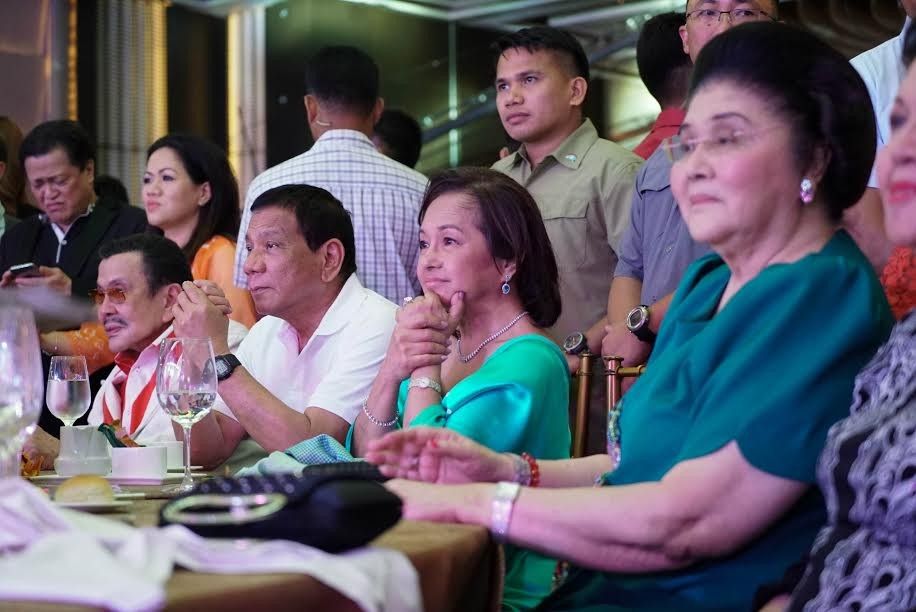 MANILA, Philippines — Arroyo, Duterte, Estrada, Marcos — some of the most prominent families in Philippine politics — are all coming together to support the presidential bid of former Sen. Ferdinand “Bongbong” Marcos Jr. and his running mate, Davao City Mayor Sara Duterte-Carpio.

The alliance — called by their critics as "unholy" — was likely forged as a result of Marcos Jr.’s lead in early pre-election surveys, according to political scientists Cleve Arguelles and Jean Franco.

Marcos Jr. said the coalition will bring back stability in politics and the country, adding that the interest of the Philippines was the "driving force" behind the parties teaming up.

But for Arguelles, it is clear that the unity forged among families controlling these parties has one goal: To keep themselves in power.

"It's quite clear that it’s the interests of these political families being forwarded in this coalition or alliance," Arguelles told Philstar.com. "And it makes sense, as a political family, your goal in 2022 is to keep yourself in power and to ensure that you’ll gain access to government power."

Arguelles said this is just politics as usual as far as the Philippines goes, with political families negotiating among themselves as to who gets to sit next.

"It’s like a cartel system,” he said. “But it’s the same set of families who will be part of the ruling coalition."

For Franco, this just shows that the political parties in the country are still immature.

"Alliances without clear ideologies and common programs and policies still manifest that our parties are not yet well-developed," she said.

In September, labor leader Leody de Guzman, an outlier presidential candidate for progressive socialist coalition Laban ng Masa, stressed that there is a need for a change in the political system, not just in its leadership.

He added that voters need more than big-name candidates with promises of progress.

(They will only make voters happy during the campaign, but after the elections, they snub the people who voted for them.)

It is certainly not lost on the leaders of the alliance that they are bringing dynastic politics to a whole new level, with former Sen. Jose "Jinggoy" Estrada, PMP president, even acknowledging that he, Duterte-Carpio and Marcos Jr. are children of former presidents.

(We three are children of presidents. Serving and loving the country will always remain in our conscience, in our blood and in our hearts.)

But what is glossed over is the fact that Estrada’s father, Joseph, was ousted from power through a military-backed popular uprising and was convicted of plunder thereafter. He was later pardoned by then-President Gloria Macapagal-Arroyo.

Marcos Jr.’s father, Ferdinand, was also removed from Malacañang through popular protest after two decades of his rule, under which thousands of human rights abuses were committed and billions of pesos were stolen from government coffers.

Duterte-Carpio’s father, Rodrigo, has been accused of crimes against humanity before the International Criminal Court for his bloody "war on drugs" which has killed thousands of drug suspects. The government has rejected these accusations and has said that the ICC has no jurisdiction over the Philippines, which left the court in 2019.

The Supreme Court acquitted Arroyo, chair emeritus of Lakas-CMD, of plunder in 2016. Arroyo, who was later House speaker, thanked Duterte in 2019 for "[providing] the atmosphere in which the Court had the freedom to acquit me of the trumped up charges of my successor and your predecessor."

While certainly formidable, the alliance between HNP, Lakas-CMD, PFP and PMP in support of Marcos Jr. and Duterte-Carpio is not yet sure to deliver the victory that they want come 2022.

Arguelles recalls the poor showing that HNP had in local races, despite Duterte-Carpio having heavily campaigned for the party’s bets.

"It appears that command votes, the capacity to deliver the votes of your supposed bailiwicks, that’s not 100% guaranteed as well," Arguelles said.

Duterte-Carpio was a frontrunner among potential candidates for president in the months before the filing of Certificates of Candidacy. She initially filed to run for reelection as Davao City mayor, but withdrew her bid earlier this month to file as a subsitute vice-presidential candidate for Lakas-CMD.

She replaced an official candidate who was widely considered as a placeholder.