Poll has Marcos ahead in 60 of 67 provinces 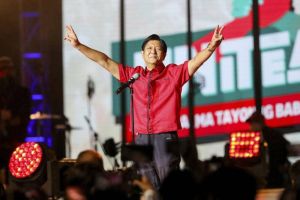 (UPDATE) PRESIDENTIAL candidate Ferdinand “Bongbong” Marcos Jr. is the top choice of respondents in 60 out of 67 provinces, according to the latest Kalye Survey.

In Kalye Surveys nationwide conducted as of March 24, Marcos was the top pick of 83,168, or 61.1 percent, of the respondents.

His closest rival was Vice President Maria Leonor “Leni” Robredo with 13,776 or 10.1 percent.

The Kalye Surveys, which were done from October last year to March 24, had 135,406 respondents, with the undecided pegged at 12.4 percent.

It also gathered from the same data that Marcos ranked first in 60 out of 67 provinces with available data.

The lowest rank Marcos got was third, but only in one province. He ranked second in six provinces.

The Kalye Surveys were conducted in 81 provinces, but data from only 67 provinces had been uploaded at the time of tabulation.

She ranked second in 23 provinces, third in 19 provinces, fourth in 16 other provinces and fifth in five others.

Moreno and Lacson did not rank first in any of the provinces.

“How can the leading presidential aspirant who has the highest preference shares and ranked first in 60 out of 67 provinces with available data be beaten? In what alternate reality can that be possible?” Splat said in a statement.

The data provider also reproached sectors that are questioning the Kalye Surveys, including the tabulations and analysis they present to the public.

“We would like to reiterate that we are not forcing anyone to believe the results that we present as well as our analysis. Being disagreeable does not give anyone the authority to disrespect or even bully anyone. Everyone is free to agree or disagree, but being in a disagreement does not grant anyone the right to be rude to anyone. It just goes to show the kind of person that you are and the kind of candidate you support,” Splat said.

“We reiterate that the results we present are based on the cumulative Kalye Survey results nationwide. Those who say that the results are fake, we challenge you to undertake the tabulation yourself to find out if we are releasing the correct data. The data we present are available anytime from the videos from all the channels and vlogs who have conducted surveys face-to-face with full video documentation uncut from end-to-end,” it added.

Marcos and his running mate, Davao City Mayor Sara Duterte-Carpio, have been consistent frontrunners in other presidential and vice presidential polls.