LEGAZPI CITY – Amid limitations caused by the global pandemic, the Commission on Population in Bicol (POPCOM-5) found ways to carry out a host of activities – from webinars to house-to-house information campaigns – that raise awareness on teenage pregnancy and reproductive health in the region.

Meanwhile, the Social Protection Program for Adolescent Mothers and their Children (SPPAMC) workshop, another activity in partnership with the Department of Social Welfare and Development, will be held to determine the state of teenage pregnancies in different areas in the region.

Morallos said the towns of Buhi, Nabua and Iriga City in Camarines Sur are eyed as venues for the event because of their readiness and willingness to address women’s and children’s health issues.

“When it comes to the provinces with high number of teenage pregnancy cases, for how many years, the province of Camarines Sur ay laging nangunguna dahil siguro ito ‘yung pinakamalaking province [in Bicol] and sila ‘yung may pinakamalaking population (has always been on top maybe because it is the biggest province in Bicol and has the largest population),” she added.

To deliver their programs on family planning, Morallos said they also held a house-to-house information drive.

Meanwhile, “U4U” is a teen caravan focusing on information on adolescents’ sexual and reproductive health and the prevention of teen pregnancy among children.

According to the POPCOM, 11,224 teenage pregnancies were recorded in Bicol in 2019.

The POPCOM reminded parents, as primary educators, to guide and educate their children about sex and reproductive health. (With reports from Eliakim Neric/PNA-OJT) 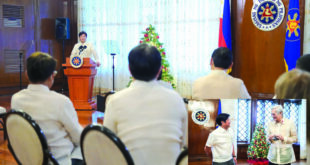