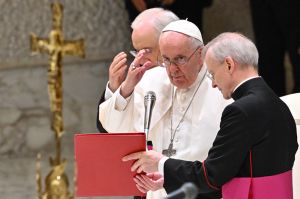 POPE Francis extended his congratulations to Ferdinand “Bongbong” Marcos Jr. for his upcoming inauguration as the 17th President of the Philippines.

“I send my congratulations and cordial wishes to your excellency as you begin your mandate as the president of the republic,” Pope Francis said in his message shared by the Papal Nuncio to the Philippines, Archbishop Charles Brown.

The pope said he is praying for Marcos as he takes over the mantle of leadership of more than 100 million Filipinos.

“In assuring you of my prayers that you will be sustained in wisdom and strength, I invoke the Almighty God's blessings of peace and prosperity upon the nation,” the pope added.

Marcos will be formally sworn in as president on June 30 after being elected by the majority of Filipinos in the May 2022 elections.

His inauguration will be held at the National Museum of the Philippines at 12 p.m. He will be sworn in by Supreme Court Chief Justice Alexander Gesmundo.

Archbishop Brown earlier revealed the positive conversation he had with Marcos when he made a courtesy call on June 10. Their discussion centered on strengthening the relationship between the church and government.

The Vatican representative in the Philippines said Marcos expressed his willingness to cooperate with the church.

“We had a very productive, encouraging and positive discussion. The president-elect has assured me of his desire to collaborate and cooperate closely with the church and the Holy See,” Archbishop Brown added.

The Catholic Church in the Philippines already assured continued engagement with the incoming government for the benefit of Filipinos.

According to Caritas Philippines national director, Kidapawan Bishop Jose Colin Bagaforo, they will work with the new administration on programs that will address the rights and dignity of the people as well as promote truth and honest governance.