In an interview last Jan. 19, eight days before he turned 60 (on Jan. 27), Funfare asked Willie Revillame if his charity work on his show Wowowin/Tutok To Win was “politically motivated” and he categorically replied, “Once and for all, I want to say that I don’t have any political plans. I am not a politician. I have experienced how it is to be poor and now that I can afford it, gusto ko lang maging masaya ang mga mahihirap. I just want them to be happy.”

But Willie might just change his mind after he got a call from no less than Pres. Rodrigo Duterte last Saturday (Feb. 27) while he was having dinner with Sen. Bong Go and Executive Sec. Salvador Medialdea at a Greenhills restaurant arranged by Siomai King Jonathan So. Willie with Sen. Bong Go and Executive Sec. Salvador Medialdea during a dinner at a Greenhills restaurant Saturday night (Feb. 27).

Sen. Bong told Willie that Pres. DU30 was happy with what Willie is doing (“Natutuwa siya sa’yo”) so he set the dinner purposely to thank him and to tell him, “Sabi ni Presidente, ‘Tell Willie to keep his options open.’ That’s also why nakipag-meeting kami sa’yo.”

During the five-hour dinner that started at 8 o’clock, Sen. Bong asked Willie what his plans are and Willie said, “None. From the very start, my show has been making people happy at kahit papano ay nakakatulong naman.” 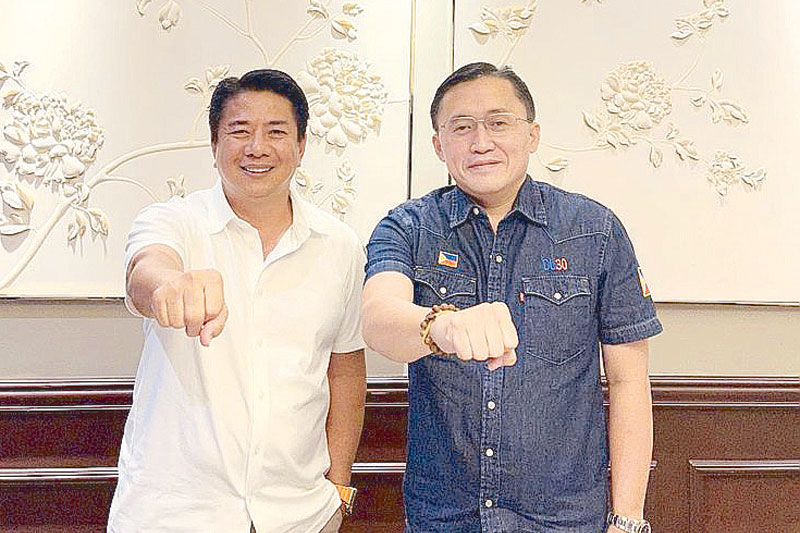 Willie Revillame with Pres. Rodrigo Duterte when they campaigned for Bong Go during the 2019 elections when Go ran for senator and won.

When Willie casually mentioned that meeting in his show last Monday, it generated speculations. If ever, can Willie say no to Pres. DU30? So far, even if she’s leading in the surveys on 2022 “presidentiables,” Davao City Mayor Sara Duterte-Carpio has been quoted saying in interviews that she’s not running, with her dad himself saying that she should not, but the elections are still one year and two months away and people can change their minds. Supposing Sara changes hers, headlines would herald thus: If Sara runs, will “Wil” be her running-mate? Sen. Bong is also rumored to be “interested” and, again if ever, who will be his vice presidential bet…and Will “Wil” lead his senatorial line-up? Willie shows his senior card as he turned 60 last Jan. 27

That remains to be seen. The possibility is staggering.

Willie has been inviting as special guests political bigwigs such as Presidential Spokesperson Harry Roque Jr. (who even previouly used part of Willie’s WilTower as venue for press briefings), Cabinet Sec. Karlo Nograles and Sen. Manny Pacquiao (who donated an additional amount to cash prizes Willie is giving away to his viewers every day). Are these tell-tale signs of Willie’s “feelers” about a political “possibility”?

Asked what else, what “options,” he and Sen. Bong and Sec. Medialdea discussed during that five-hour dinner, Willie was mum. But his smile was revealing.

At 60, Willie actually has few options left. He has already divided his vast fortune among his three children and other loved ones. He continues to make people, especially the poor, happy with generous giveaways (including house and lot as jackpot prize, etc.), remembering how once upon a time he missed meals and slept on hard floor in a squatter area off Kamuning Road in Quezon City. Payback time, he said.

He pampered himself on his recent birthday with a…brace yourselves!…spanking new chopper to be delivered anytime this month.

Meanwhile, he’s using the old one with himself as pilot, flying back and forth between Manila or Tagaytay or Puerto Galera, commuting as if he’s just navigating the streets of Metro Manila. He said that after this phone interview with Funfare, he was rushing to Puerto Galera and then back to host his show (airing direct from WilTower). On weekends, he relaxes by flying to Tagaytay to supervise the construction of another house.

After two failed marriages, is his love life over and done with? Is he remaining single for good (although it’s unbelievable knowing his track record in that department)?

“I have no time for that. I am attending to so many things, so hindi ko ‘yan maasikaso.”

He has just signed up as endorser for Shopee (see accompanying story below) and, you guessed it, his talent fee will be distributed among his show’s lucky callers (easy does it: submit your contact number and if you get a call, voila, you win big money plus jackets).

Asked why Shopee of all the offers for endorsement, Willie explained, “How can I say no to a company that has been helping my show? The negotiation was finalized in one year.”

Has his outlook in life changed now that he’s a certified card-carrying senior citizen? (He’s entitled to a 20-percent discount but he said he hasn’t used his Senior Card just yet.)

“Well, more of parang maingat, kalmado especially where my health is concerned. There are do’s and don’ts. Huwag abusuhin ang sarili, huwag magpuyat, get enough sleep, keep a healthy diet, avoid stressful things. I will start working out again.”

His current state of being?

What does happiness mean to him?

“When you help people and make them happy. That’s what happiness is to me.”

By the way, generally speaking, what kind of presidential candidate will he drum up for?

Alisah Bonaobra goes on a US concert tour

‘Four Kings and a Queen’ take over NPAT

FROM 41 Miss Philippines-Earth (MPE) 2022 official candidates introduced in May, the final Top 20 …