Priority from the start? Gov’t data show private-run labs do most COVID-19 tests 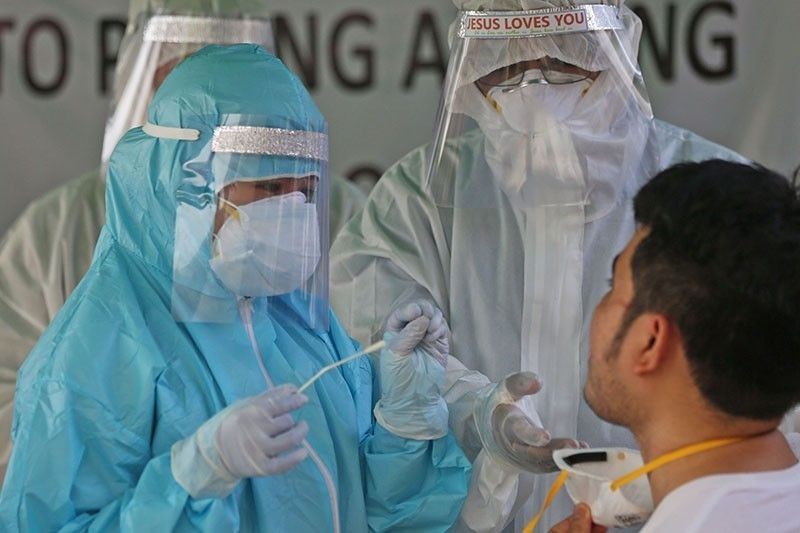 A resident of Brgy. San Miguel in Taguig City undergoes swabbing for coronavirus testing on April 23, 2020.

MANILA, Philippines — Malacañang has said that the Duterte administration had prioritized improving the country's coronavirus screening capacity since the start of the health crisis, but its own figures show that most of the tests were carried out by private institutions.

Palace spokesman Harry Roque on Tuesday made the claim after social media users pointed out that President Rodrigo Duterte was nine months late into realizing that testing for COVID-19 is vital to fighting the pandemic.

"That is not true," he said in Filipino. "From the very beginning, we have prioritized ramping up our testing capacity that's why we have one of the highest capacities in Asia."

Data from the health department's tracker website as of December 7 showed a total of 6,046,742 tests run by both public and private facilities, with 5,693,758 individuals tested.

This is more than half of the total tests conducted and persons screened in the country, compared to the 2,392,317tests or 2,116,698 individuals screened by 82 state-run facilities.

Roque also admitted in July that improving screening capacity at home had been slow. For one, the Philippines had to send samples from suspected COVID-19 patients to the Victorian Infectious Infectious Diseases Laboratory in Melbourne, Australia at the early stages of the pandemic.

"If I were to look back [on] what we could have done better, maybe we should have expanded our testing capacity when we confirmed our first imported COVID-19 case," Duterte's spokesman said.

Calls for mass testing had long been rejected by government, with petitions reaching as far as the Supreme Court and only for the high tribunal to strike it down. Health Secretary Francisco Duque III has said that no country could ever afford to test all its citizens for COVID-19.

But those pushing for it have said that mass testing is conditioned on widespread, timely and accessible free tests for all those who need it, including: those exhibiting COVID-19 symptoms, both symptomatic and asymptomatic individuals who have been exposed to someone infected with the virus, health workers and other frontliners.

RELATED: Nobody is expecting it to, but Palace says government can't afford to test all Filipinos for COVID-19

The government's own expanded targeted testing goals are not so different from those outlined by mass testing advocates, but it continues to face criticism because of its slow ramp up of actual tests conducted even as it continues to tout its supposed testing capacity achievements.

To date, the country now has 144 RT-PCR and 43 GeneXpert laboratories, while some 84 more are applying for accreditation, per figures by health authorities.

The Philippine Red Cross continues to lead with the highest number of tests done at 1,372,663, or 1,340,221 individuals screened in its 10 laboratories.

Its operations back in October had faced hurdles that in turn affected the country's overall capacity, after it halted its tests funded by the Philippine Health Insurance Corp. over the agency's failure to settle its nearly P1 billion debt.

Duterte has vowed that government will settle its due to the humanitarian organization, but he also commented that Red Cross was only out for the money or "Mukhang pera," an allegation that Gordon had since denied.

His seemingly late realization of the importance of COVID-19 testing comes with 444,164 Filipinos now infected with the deadly virus, while fatalities have reached 8,677.

The Philippines' coronavirus infections remain the second highest in Southeast Asia, next only to Indonesia's over 586,000 and continue to place as the 27th all over the world. — with reports from Bella Perez-Rubio

The total number of coronavirus infections nationwide rises to 441,399 with the addition of 1,574 new cases, the Department of Health reports Monday.

Davao City posts the highest number of new cases with 187. Rizal follows with 96, Pampanga with 80, Quezon City with 69 and Pasig City with 59. — Gaea Katreena Cabico

The Department of Health reports 1,768 more COVID-19 cases in the Philippines, pushing the national tally to 439,834.

The total of active COVID-19 cases in the Philippines now stands at 22,646.