RATIONALIZING the scope and processes of government agencies with the goal of improving efficiency and productivity, an effort the Marcos administration has trendily dubbed “rightsizing,” is a praiseworthy objective. It cannot be pursued, however, at the expense of public safety. Unfortunately, that is precisely what has happened with President Ferdinand “Bongbong” Marcos Jr.'s recent veto of the bill seeking to create the Philippine Transportation Safety Board (PTSB). 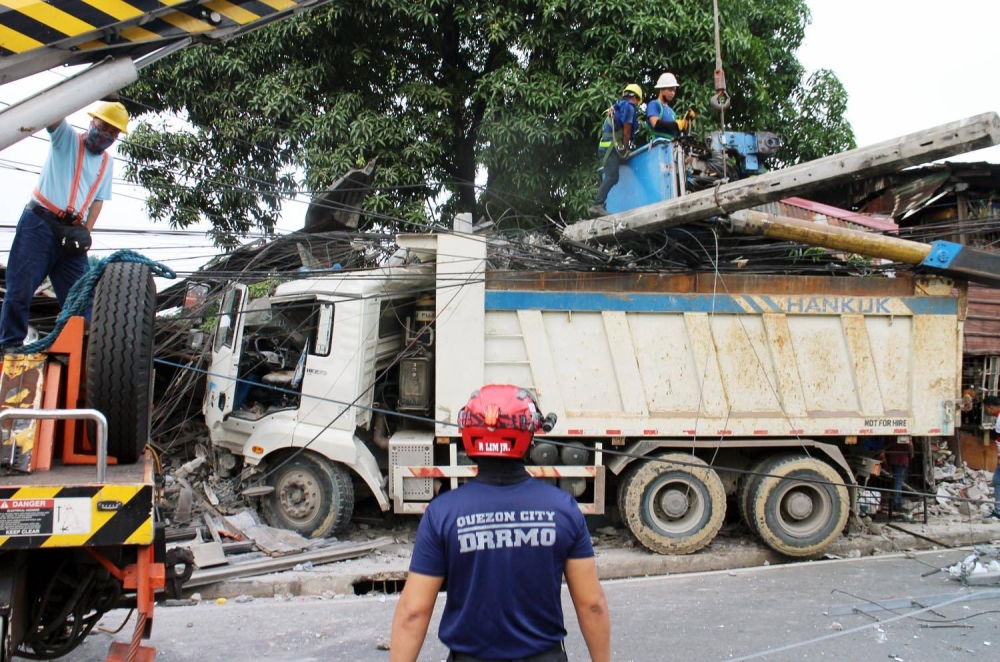 This July 28, 2022 file photo shows a dump truck stuck after crashing into junkshop and some houses on the Batasan-San Mateo Road in Quezon City. The driver and his passenger, as well as some residents, were hurt. No one was killed. PHOTO BY MIKE DE JUAN

In his veto message for Senate Bill 1077, President Marcos acknowledged that “it is the policy of the State to maintain a safe, viable, efficient and reliable transportation system in the country,” and that the proposed PTSB was congruent with this policy as “it aims to ensure the conduct of an impartial and thorough investigation of transportation accidents in order to prevent these kinds of accidents and thus, save lives and property.”

However, the President deemed the proposed PTSB redundant, as its functions are already part of the responsibilities of the Department of Transportation (DoTr) and its various line agencies, as well as the Philippine National Police and the National Bureau of Investigation. As such, the proposed new department is, in the President's judgment, likely to create “functional duplication, confusion as to authority, ineffectiveness and deficiency in the performance of its responsibilities.”

With all due respect to the President, this is completely fallacious, and simply presumes to project shortcomings that already exist in the current patchwork of responsible agencies onto the proposed PTSB.

President Marcos, or more appropriately, whoever gave him the exceedingly bad advice to veto SB 1077, should reflect on why dozens of countries with far more capable transportation ministries — including many countries that are otherwise generally considered the Philippines' peers — maintain separate transportation safety bodies similar to the proposed PTSB. It is precisely because it has been universally recognized that regulatory and investigative functions need to be separated. In an accident investigation, all possible causes — human error, negligence, or malicious action, mechanical failure, weather, and so on — must be examined and ruled in or out. The application and enforcement of regulations is present as an umbrella over all these possible causes, and therefore, the agency responsible for those regulations cannot objectively conduct the investigation.

The only existing exception to this in the Philippines now is the Aircraft Accident Investigation and Inquiry Board, which operates at a reasonable arm's length from the Civil Aviation Authority of the Philippines (CAAP). As a result, aircraft accidents are the only ones that are investigated, resolved and lead to needed follow-up action in any kind of effective manner here. This is perhaps something else that the president and his advisers should reflect on; the proposed PTSB simply seeks to extend the same effective model and good practice to road, rail and water transportation, all of which have a poor record of resolution in accident investigations.

There is also an efficiency consideration. A large part of the reason why results of accident investigations are generally unsatisfactory and thus, suggested the need for the PTSB, is that coordination among different agencies, each jealous of its jurisdiction, is generally poor. A separate investigative agency, with no other mandate than to reliably determine the cause of accidents and make recommendations, could better marshal the resource1s and efforts needed by centralizing them for a specific purpose.

And contrary to the President's concern that the creation of a new agency would run counter to the government's streamlining objectives, that would not necessarily be the case with the PTSB. All of the material and human resource1s — as well as the corresponding budget — already exist within the agencies of the DoTr and other departments; forming the PTSB, in fact, would be an initiative fully aligned with the broader “rightsizing” campaign, even though it would appear to be an expansion of the government.

It very well may be that SB 1077 as presented to President Marcos could be revised and improved. The basic idea, however, is quite sound, and a necessity for the country. Congress should review and recreate the bill, and when an updated version is presented to the president a second time, he should sign it with enthusiasm for the improvement of public safety it represents.