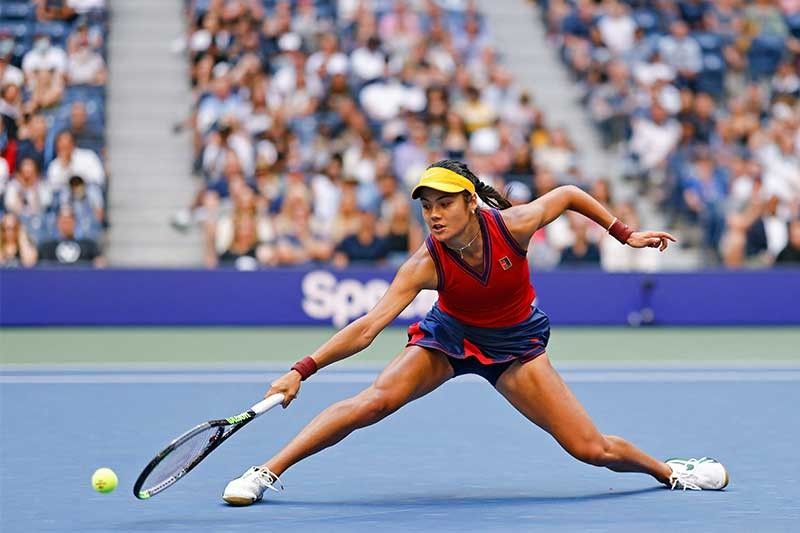 MANILA, Philippines — Great Britain's Emma Raducanu completed a sweep of the 2021 US Open after beating Fil-Canadian Leylah Fernandez, 6-4, 6-3, in the Final at Arthur Ashe Stadium on Saturday (Sunday, Manila time).

Not dropping a single set since qualifiers, Raducanu becomes the first-ever qualifier to win a Grand Slam in the Open area.

The 18-year-old bested Fernandez, who represents Canada with Filipino and Ecuadorian roots, in the US Open's first final featuring two teens since 1999.

Fernandez challenged mightily in the opening set, playing at pace with Raducanu and trading game wins to keep the game at deadlock until the 8th game, 4-4.

But a crucial break in the 10th game, where it took her four set points, helped the 18-year-old take the advantage.

Looking to force a third-set decider, Fernandez started the second set strong and took her first lead of the match, 2-1, breaking Raducanu's serve in Game 3.

The World No. 73 couldn't sustain, though, as she ended up losing five of the next six matches.

In Game 9, Fernandez looked to extend the match even more when she was up, 40-30.

But it seemed that her momentum was shaken after a medical timeout forced a break in play due to Raducanu scratching her knee on the court's surface.

Raducanu ended the match with an ace to clinch the championship.

En route to the Final, Raducanu bested Olympic champion Belinda Bencic in the quarterfinal and Maria Sakkari in the semifinal.

In the semis, Fernandez beat world No. 2 Aryna Sabalenka.

Share
Previous US pays tribute to 9/11 dead on 20th anniversary of attacks
Next Fernandez after runner-up finish in US Open: ‘I’m very proud of myself’