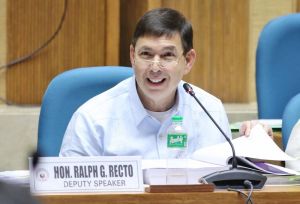 THE House of Representatives Deputy Speaker and Batangas Rep. Ralph Recto questioned the P588 billion unprogrammed funds submitted by the Department of Budget and Management (DBM), saying the proposed 2023 national budget is actually P5.856 trillion and not P5.268 trillion.

“The spending amount being asked by the Palace is actually half-a-trillion pesos more,” Recto said.

The House on Friday started deliberations on the P5.268 proposed national appropriations for the next fiscal year.

He said topping the list of “unclear and undefined” 2023 Unprogrammed Appropriations is the “Support to Foreign Assisted Projects” with proposed funding of P380.6 billion.

Also included in the unprogrammed funds is the P149.7 billion for “Support for Infrastructure Projects and Social Programs.”

“The funding footprint is big, but the appropriations language contains [a] one-liner description. It is a blank check request,” Recto added.

According to Recto, the Unprogrammed Fund is one of the biggest “lump sums” in the draft three-volume national budget Malacañang had sent to Congress.

“While it is part of the NEP, the unprogrammed fund is not included in the total amount. The result is, every popular budget literature nowadays quotes a smaller budget level,” Recto said.

Recto explained that while the Unprogrammed Appropriations can only be released if several “funding triggers” are met, the authority to spend it comes with the passage of the national budget.

“Thus P5.856 trillion is the ceiling of the proposed 2023 budget. Once the latter becomes law, it confers standby authority to the executive to spend it, provided conditions are met,” Recto said.

According to Recto, as in previous general appropriations acts, the proposed budget for 2023 states that the unprogrammed fund can only be spent if revenue targets are exceeded or once loans have been perfected.

“But the problem is, there seems to be lax compliance on this. In 2020, for example, when revenue collections were down because of the pandemic, every centavo of the P122 billion in unprogrammed appropriations was released,” Recto said.

“Same with this year. The P251.6 billion unprogrammed funds were also used,” he added.

Recto said the DBM should begin posting details of releases from the said fund on its website.

On the other hand, Recto said he supports a few items included in the Unprogrammed Appropriations, including the allocation of P18.9 billion in public health emergency benefits for frontliners and P14.6 million in local government units arrears.

“The P5 billion in AFP (Armed Forces of the Philippines) modernization, in principle, is good, but in the interest of transparency, must be itemized. The P2 billion in arrears to the IT provider of the Land Transportation Office must also be scrutinized,” Recto added.

Meanwhile, the DBM has proposed at least a P2.49 billion fund for the Department of Environment and Natural Resource1s' National Greening Program.

According to the DBM, the amount is intended for the planting of 6.18 million seedlings in 11,631 hectares of land resource1s.

“We have documented an average of 21.3 percent increase in climate-related expenditures from 2015 to 2023. With the continuous help of implementing agencies and of every Filipino, we can work toward climate resiliency to safeguard a sustainable future for our country,” DBM Secretary Amenah Pangandaman said.

The P2.49 billion funding is included in the P453 billion proposed budget for climate change adaptation and mitigation for 2023.

The proposed climate-related expenditure for 2023 is 56.4 percent higher than this year's P289.73 billion budget.

According to the DBM, P264.89 billion will be used for water sufficiency projects, P131.51 billion for sustainable energy, and P40.78 billion for food security.

“Climate change expenditures shall continuously prioritize funding for major programs such as the Flood Management Program of the Department of Public Works and Highways with a budget allocation of P168.9 billion. This will cover the construction and rehabilitation of flood-mitigation structures and drainage systems nationwide,” the DBM added.

The climate-related expenditures were part of a joint memorandum circular issued by the DBM and the Climate Change Commission.

The memorandum is aimed to track, monitor and report programs that help address and alleviate problems posed by climate change.