Resolution on Nuezca admin case out by Monday, Sinas says 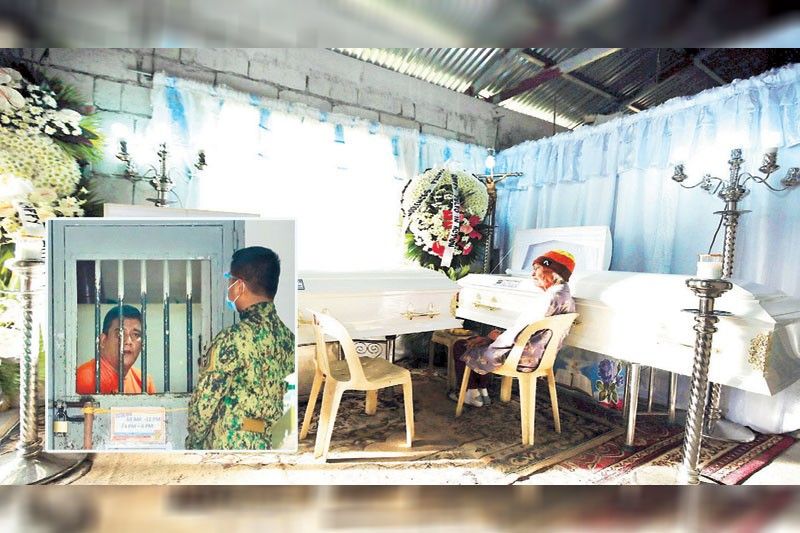 Carmel Rufino, 94, sits beside the caskets of daughter Sonya Gregorio and grandson Frank Anthony at their wake in Paniqui, Tarlac yesterday. Right inset shows suspect Master Sgt. Jonel Nuezca in his cell at the Paniqui police station in Tarlac.

MANILA, Philippines — The resolution on the administrative cases filed against the Paniqui cop who killed a mother and her son in late December is slated for next week, the chief of the national police disclosed Monday.

Speaking to reporters at a press briefing that morning, Police Gen. Debold Sinas said that the case of Police SMSgt. Jonel Nuezca, who was filmed shooting 52-year-old Sonya Gregorio and her son Frank Anthony Gregorio—both unarmed—at point-blank range in a video that has since circulated social media, is set for pre-hearing on Monday.

"The case is being heard by the Internal Affairs Service, and the IAS promised to finish the case at the end of this week. So we'll have the resolution by Monday," Sinas said in mixed Filipino and English.

"By next week, this is under the jurisdiction of [Police Brig. Gen. Vicente Danao Jr., chief of the National Capital Region Police Office] who will give the final decision if he will abide by the recommendation of IAS. That is the system we will do so we can hasten the process and achieve the less than 30 days of pre-charge and summary hearing of Nuezca,” he added.

Nuezca, who was assigned at the Parañaque City Police Crime Laboratory, faces a criminal case filed at the Regional Trial Court Branch 65 in Paniqui, Tarlac and an administrative case for two counts of grave misconduct and two counts of conduct unbecoming of an officer.

According to Sinas, the killer cop has since been transferred to the Bureau of Jail Management and Penology in Tarlac.

Calls for reform resounded on social media in the days following the killings. Government execs including Police Brig. Gen. Brandi Usana, the spokesperson of the PNP, were quick to condemn the killing but also asserted that it was an "isolated incident."

The same officials—including former PNP chief Sen. Ronald dela Rosa and Interior Secretary Eduardo Año—deny to this day the idea that a culture of impunity and violence exists within the PNP, saying "nobody encourages killing" within the agency.

READ: 'I don't care about human rights,' Duterte says, urging cops to 'shoot first' | Dela Rosa: Not all cops are like Nuezca

Critics say, however, that the incidents of violence within and beyond the PNP are a direct result of President Rodrigo Duterte's statements in the past, which they say only emboldens erring cops to carry out crimes.