Retrospective: A futsal bronze for Philippines in 2007 SEA Games 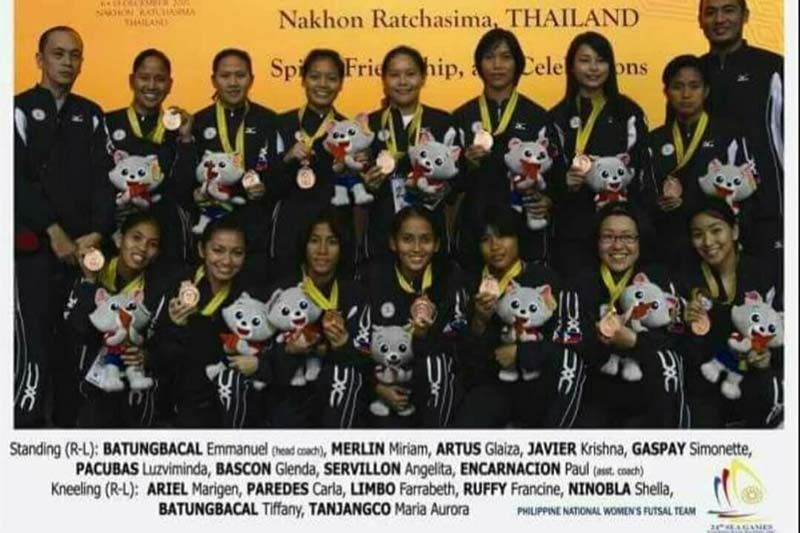 MANILA, Philippines — As part of the 40th Year celebrating futsal’s being played in the Philippines, here is another retrospective on the game and its development.

That team was put together by happenstance, goodwill, coke bottles and garage drives, band aid, and well, an us-against-them mentality.

Ironically, it began with a thesis paper.

“When I was putting my thesis paper together at the College of Human Kinetics over at the University of the Philippines, it was about futsal,” revealed Manny Batungbacal who was the coach of that 2007 women’s futsal team. “In my thesis, I asked the question, ‘if you use the sole of your foot, will it gain an advantage to winning a game?’”

Based on all the evidence… how about a resounding “yes?”

While teaching at the Assumption College in Makati, Batungbacal noted that they had no football fields so they made use of the basketball court to play indoor football.

“I didn’t know anything about indoor football – the tactics, the training techniques,” recounted Batungbacal. “What I did was apply basketball ideas and techniques into the game such as playing a form of zone defense and others. And it worked because our team began beating other teams especially the ones from the big schools.”

Added the coach, “Bakit kami nananalo? Hindi naman kami football school. There must be something in our approach to the game.”

From collegiate futsal, Batungbacal saw on the internet something about the Asian Indoor Games and he wondered how he could join.

“I had to check the internet and learned of the Philippine Football Federation,” recounted the coach. “When I first paid them a visit, the General Secretary was former Ateneo football star Domeka Garamenda while the President was Johnny Romualdez.”

“Now they didn’t know me at all and they were sizing me up if I was serious or joking about forming a team. Eventually, they gave me their blessings but I also had to look for my own funding as there wasn’t money allocated to the team.”

To be able to compete in the Asian Indoor Games and other tournaments, the team resorted to various fund-raisers, collecting soft drink bottles and getting deposits, dyaryo drives, and well, there was coach Manny’s Suzuki Vitara that he sold to help fund their trips.

“The things you do for the love of the game,” he laughed.

When they got to the Asian Indoor Championships, they were shocked at the different dimensions to the court. “We had to make adjustments on the fly,” said Coach Manny.

The team finished fourth in the Asian Indoor Games but they pulled off the stunner of the competition by beating Malaysia.

“The game was intense and surreal,” recalled team captain Ria Tanjangco of the win.

At one point, Malaysia’s team captain was using every trick in the book to intimidate Tanjangco who gave as good as she got. “The UAAP toughens you up for this,” she noted.

When her Malaysian counterpart came back for one physical sortie, Tanjangco pushed back and the former, not expecting the Filipina to be braced for the head-on collision, fell back and hurt her knee. The Malaysian was out for the next three months and now, the two teams did not officially like each other.

Come the 34th SEA Games in Thailand (the futsal competition was from December 6-13, 2007), Malaysia got back at the Philippines in the group stages, 3-2, in a tightly fought and physical match.

The Filipinas rebounded from their opening day loss to best Laos, 4-1. Yet on deck, were the highly-fancied Thais.

Observed Tanjangco, “The Thais were a new opponent for us and they had a superior program plus the home court advantage. Had we qualified first in our group, we had a good chance of making it to the gold medal game because we were confident we could beat Vietnam.”

The home side whipped the Filipinas, 9-2, to go to the gold medal game against Vietnam leaving the Philippines with one last chance to salvage a medal.

For the bronze… it was Malaysia and the Philippines… Round 3.

“We wanted to get back at them,” stressed out Tanjangco. “Our loss to them was a bitter pill to swallow.

The game was with its expected physicality. But the Filipinas prevailed in convincing fashion to bag the bronze, 3-1.

“I think what we went through collectively will forever bond us,” summed up Batungbacal. “And it isn’t every day where you give honor to your country. It was a nice run for us.”