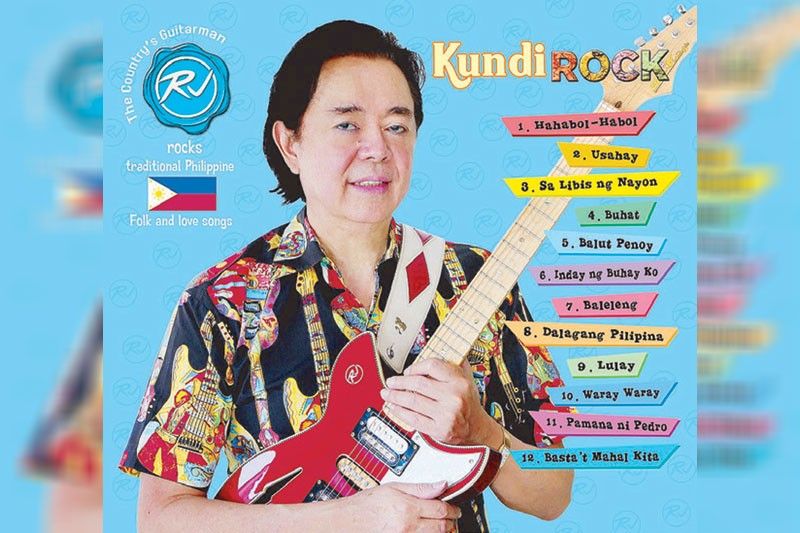 Ramon Jacinto is a busy businessman. He is involved in steel and radio and TV broadcasting and retail. He has served in government in various capacities. He is also heavily into music as a singer and musician doing recordings and live performances.

You would think that given the current unsettling situation, he would be busy nursing his various businesses through this precarious period. He probably is. But flagrant COVID-19 pandemic and booming recession around him or not, nothing can keep RJ away from the music.

This is what makes Kundirock, RJ’s new album such a refreshing sight and of course, sound. He found the time to do this? And to double the surprise, it is available on CDs. Isn’t it a fact that every new music that comes along these days is only found in digital platforms online?

Well, Kundirock can be found on YouTube but it is also on physical CDs.

Kundirock stands for Kundiman Rock. That should mean songs of the native kundiman genre rearranged in RJ style rock and roll. He has already done the albums Swinging Kundiman and Kundiman ni Guitarman of the same type a few years ago. Now using the tested formula, he has made the series of albums into a trilogy with Kundirock.

Kundiman was what a Filipino art song about unrequited love called in the old days. Think of the likes of Anak Dalita or Pakiusap. If one goes deeper into what the kundiman really is though, you will find out that the romantic sentiment in those songs was merely a disguise for something else.

The composers of the early kundiman hid their love of country and desire for freedom behind the lament of a rejected lover. That is why it is kundiman, which comes from the words “kung hindi man.” Like “kung hindi man ako ibigin,” which was actually saying “kundi di man ako makalaya” from whoever were the oppressors of the time like the Spaniards, then the Americans and then the Japanese.

Over the years though, kundiman came to mean simply a traditional Filipino song. That is any song. The song can be a harana, a folk song or a balitaw or even a Spain-derived bolero but if it is old and Filipino, then it is referred to by many as a classic kundiman.

Such is the varied line-up of tracks in RJ’s Kundirock. The album is not really made up of true kundimans but of different kinds of old songs. But it is an engaging piece of work that is all Filipino and which certainly provides respite from all the K-pop, hip-hop and other modern sounds infesting our ears today.

Setting the tone of Kundirock is Hahabol-habol, the pop classic composed by Clod Delfino and popularized by Bobby Gonzales over 60 years ago. It was first heard in the soundtrack of the iconic movie Lo’ Waist Gang. It is an apt opener given the fact that RJ is known as a rock and roll artist and Hahabol-habol was the first Filipino rock and roll song ever recorded.

Then there is the instrumental Pamana ni Pedro. The arrangement is so simple but the entire song is oh so beautifully done. Though it rocks in a different way, it is certainly Kundirock’s standout. It is an unfamiliar tune but it is in this cut that RJ as the Guitarman is at his best. Listen and bring on the goose bumps.