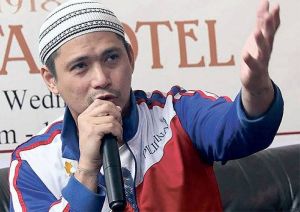 (UPDATE) ACTOR Robin Padilla climbed to third place in the survey conducted by Pulse Asia from April 16 to 21, getting 42.9-percent voter preference.

It was the same rating that he got in the firm's survey in March — 42.5 percent. Padilla's ranking rose because support for other frontrunners dropped significantly.

Broadcaster Rafael “Raffy” Tulfo and Antique Rep. Lorna Regina “Loren” Legarda, a former senator, maintained their lead in the survey at 50.4 and 49.4 percent, respectively. However, support for Tulfo declined by 15.4 percent. Legarda also suffered a decrease of 8.4 percent.

Meanwhile, among the 177 party-lists, Pulse Asia noted that 10 groups surpassed the 2-percent voter preference threshold needed to secure at least one seat in the House of Representatives. It added that only 79 percent of the respondents reported an answer for a party-list to support in the polls.

On the other hand, Escudero and Gatchalian were the top picks of voters in the National Capital Region (NCR) for the Senate race, getting 49.8 and 45.4 percent, respectively.

Others who garnered more than 40-percent voter preference were Tulfo and Legarda.

Pulse Asia conducted face-to-face interviews with 2,400 respondents nationwide among adults ages 18 years old and above who are registered voters and are likely to vote in the upcoming polls. Results of the survey have a ±2 percent error margin at the 95-percent confidence level.

The Manila Times is the media partner of PUBLiCUS.