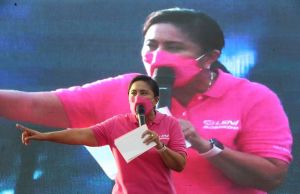 EIGHT transportation sector groups on Friday made a covenant with presidential candidate Vice President Maria Leonor “Leni” Robredo to address the sector's concerns, defend the rights of its workers, and ensure their full involvement in society.

The Robredo camp made it clear it was not soliciting votes from the groups.

But Sarmiento attested that “si VP Leni ang nanguna sa pagtulong sa aming mga drivers noong nagsimula ang lockdown dahil marami sa amin ang nawalan ng hanapbuhay (When the lockdown began, VP Leni was the first to assist us, the drivers, because the majority of us had lost our jobs).”

Having a comprehensive plan in place to ensure a backup livelihood for drivers and operators in the event of job loss due to circumstances, as well as modernizing public transportation, were among the covenant's key points.

It also stated that medical assistance and adequate training in road safety will be provided for the benefit of both drivers and commuters.

Robredo said that even as vice president, she is trying her best to assist transport workers, which was among the sectors hardest hit by the pandemic.

Rodriguez said the pullout of Robredo is a “non-issue.”

“She is a strong candidate, and she has the best chance of overtaking the survey frontrunner,” he said.

Rodriguez said Robredo's campaign is gaining prominence, as evidenced by the massive crowds that attend her rallies.

On Easter Sunday, Domagoso, alongside two other presidential candidates, Sen. Panfilo “Ping” Lacson and former Defense Secretary Norberto Gonzales, called for the withdrawal of Robredo from the race.

On Thursday, Robredo's spokesman, Ibarra “Barry” Gutierrez 3rd, said Robredo had not asked any presidential candidate to drop out.

“I believe VP Leni's spokesperson. It's not in her character to call on any of her opponents to back out and give way to her. She's a very respectful, circumspect and very proper person,” Rodriguez said.

Rodriguez said that if Domagoso made the call to push his campaign, “he has already achieved his purpose.”

“But it is negative publicity, judging from the flak he has been getting. Even those who were in the press conference with him have dissociated themselves from his statement. In fact, Secretary Gonzales has even apologized to VP Leni for his presence there,” he said.

“Look for another issue to exploit,” Rodriguez advised Domagoso.

As the May 9 elections nears the homestretch, President Rodrigo Duterte may be attending the joint rallies of the Partido Demokratikong Pilipino-Lakas ng Bayan (PDP-Laban) and the UniTeam alliance of presidential frontrunner Ferdinand “Bongbong” Marcos Jr. and running mate Davao City Mayor Sara Duterte-Carpio.

Duterte has maintained he will remain “neutral” in the presidential race, but Matibag said there is “a chance” that the President might attend the joint rallies.

He said the UniTeam and PDP-Laban are on good terms.

The PDP-Laban aligned with the administration has endorsed Marcos' candidacy and Duterte-Carpio's bid for the vice presidency.

The President has endorsed his daughter's candidacy but has not given his blessing to any presidential candidate to avoid speculation that he will use public funds to campaign for his preferred successor.

In a related development, the five National Artists, who had recently voiced support for Robredo on Friday declared they were also backing her running mate, Sen, Francis “Kiko” Pangilinan.

Almario said the group believes Robredo and Pangilinan are the best candidates for the May 9 election. If Pangilinan assisted Robredo in executive responsibilities, the administration would be stable.

The group also emphasized that Robredo and Pangilinan can promote the ideals of Katipunan sa Kultura at Kasaysayan, which stress the importance of culture, the arts and our history in every Filipino's everyday life, but which are gradually being forgotten.

The Order of National Artists of the Philippines is an honorary title granted by the government to Filipinos who have made important contributions to the development of Philippine art.