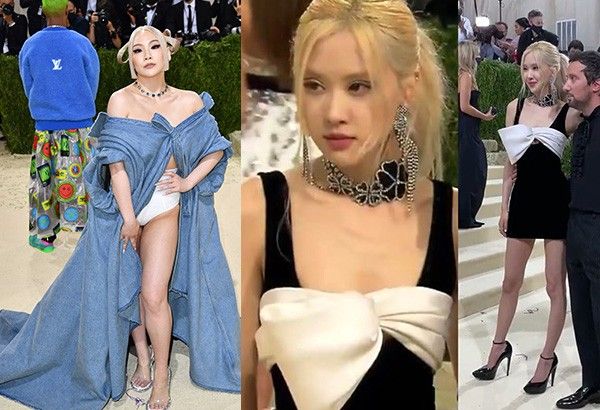 MANILA, Philippines — A former and a current YG Entertainment artist made history as the first female K-pop idols to have strutted on the Met Gala red carpet.

Former 2NE1 member CL and Blackpink's Rosé represented K-pop well in Alexander Wang and YSL, respectively, in one of the arts and fashion world's most anticipated fundraising events.

The now-solo artist CL donned what Wang called "underwear as evening wear" ensemble — a blue overcoat denim that falls on the floor like a trail over a white brief.

Rosé, meanwhile, was classy yet sexy in a classic black dress with a bow detail at the front. The YSL ambassador walked the red carpet with the house's creative director Anthony Vaccarello.

Days prior to the actual event on September 13 (US time), Rosé had been spotted at the YSL boutique in New York. Rumors had it that she was attending the annual gala, which had been moved to September from its traditional first Monday of May date.

Apart from Rosé and CL, other K-pop idols have graced the event. EXO's Lay made his debut in 2019, wearing a suit imprinted with a UFO in space. "Gangnam Style" hitmaker Psy rocked a red and black checkered tuxedo jacket paired with black pants, while Super Junior's Siwon looked dashing in a classic bow and tie suit in 2013. OG (original) Hallyu superstar Rain wore a bespoke tuxedo from German brand MCM in 2015.

Each year, the Met Gala is held with a theme. This year, the theme was "In America: A Lexicon of Fashion," which highlights American fashion.

The Met Gala was established in 1948 and is held annually to raise funds for the benefit of the Metropolitan Museum of Art's Costume Institute in New York City.

RELATED: In Photos: What stars wore at 'surreal' Met Gala 2021

Share
Previous Toni Gonzaga called out for Bongbong Marcos interview
Next What Happened to Christopher Lao After Being Cancelled Online?