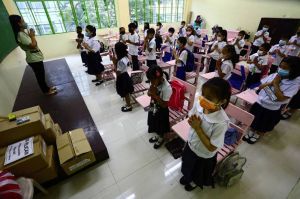 A schoolteacher and her students pray before staring their first class for the new school year at the Pedro Guevarra Elementary School in San Nicolas, Binondo, Manila on Monday, Aug. 22, 2022. PHOTO BY MIKE ALQUINTO

School opening week was hounded by the usual problems: lack of classrooms, lack of teachers, teachers who needed to be upskilled and a K to12 system with holes to be plugged. To be fair, the government has tried its best to build classrooms as fast as it could, especially in the rebuilding of those that were devastated by typhoons.

The shortage of teachers — or the lack of interest in the teaching profession — is most keenly felt in the urban areas where class size could go to as many 60 to 70 students, according to the Alliance of Concerned Teachers (ACT). The ACT has urged the Department of Education (DepEd) to hire more teachers and reduce class sizes.

As of 2021, ACT said, 26,000 teaching positions had yet to be filled. An additional 10,000 teaching positions were created under the 2022 General Appropriations Act. On top of these, from 2016 to 2020, an additional 2,500 positions were left unfilled by the Education department. One way to address the teacher shortage is to provide subsidized review classes for those who almost passed the Licensure Examination for Teachers (LET).

Another way to draw more people to teaching is to increase their salaries. From P20,754 in 2019, Teacher 1 salary grade 11 received P25,439 per month in 2022. It will increase to P27,000 in 2023. These salaries are not to be sneezed at, but they are woefully not enough in an economy where the price of sugar per kilogram has ballooned to P100 and a kilogram of onions has a barbed-wire price of P400. The teachers' salary increases cannot cope with the runaway inflation the past two years.

Before and after World War 2, the brightest young Filipinos studied in the public schools. The trend was reversed in the 1960s, when the budget for public education dwindled and the reputation of teachers suffered. The bright children were encouraged to become doctors and lawyers. The ambitious ones were coached to enroll in business courses, while those who plodded along could become public school teachers, “who will always get a monthly salary any way.”

The situation got so bad in the 1980s that public school teachers left to work overseas as housemaids and caregivers in Singapore, Hong Kong and the Middle East. They were premium hires. The foreign employers liked them because they spoke English, were good with children, cooked “exotic” dishes and “always took a bath,” according to the surveys. The downside was the plunge in the number of teachers, and the social costs of overseas employment: fractured families, spoiled kids, the strain of long-distance relationships.

The most controversial issue is the K to 12 system. In theory, we need this system, since an additional year will give students enough training so they can enter the employment stream after Grade 12. Moreover, we are one of the few countries in the world (the others being in Africa) that had less than 12 years of schooling for students.

Planned and developed during the years of the Arroyo administration, the K to12 system was implemented in the 2012-2013 by the succeeding Aquino 3rd administration. Its first full cohort of students will graduate from high school in 2024. While systems analysts will tell you let us finish the whole cohort first and then analyze the results, others will say preliminary studies can be done by looking at the results of the national examinations.

The results are dismal. When compared to the rest of Southeast Asia, the Filipino pupils ranked very low in reading comprehension, science skills and mathematics aptitude. From a country whose educational system was once the envy of all Southeast Asia, we became the laggard.

We think the K to 12 system can still be saved by hiring teachers, training those who are already teaching, having compliant textbooks and introducing multimedia learning platforms. We still have time; the race is still on.

Otherwise, we will be known not just as the country that educated rice farmers in Asia and is now the biggest rice importer in the world. We will also be known as the top student who has been knocked off its perch and is now at the bottom of the heap.

Sounding the death knell for POGOs

Complementarity may be key to classroom backlog

DoJ ruling on ‘green energy’ a potential boon for PH