Samantha Bernardo on being always the runner-up: ‘It’s probably my destiny’ 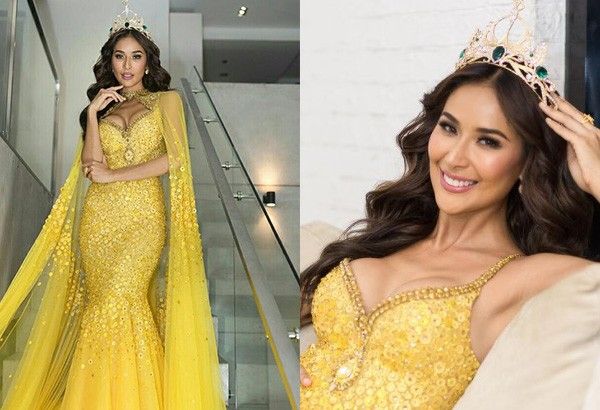 Simply dubbed "Returning to the Philippines," the online event was moderated by Gines Enriquez.

After close to two months from her departure for Bangkok to compete in the MGI 2020 tilt, Samantha was finally able to secure a seat on the first available flight, after the route to Manilla opened, due to travel restrictions.

After her outstanding performance on the Miss Grand International stage, Sam was so excited to be back home and tell supporters about her journey to the gold crown. She arrived in the very early hours last May 13 and went straight to quarantine at the Conrad Hotel in Pasay City.

Her first order of business was to announce the new date of the Binibining Pilipinas coronation night on July 11, 2021. The pageant date has been moved twice already – from March 27 to June 27.

After which, a photo collage was presented to her and she was asked to comment on each frame. The collage featured moments from her sojourn in Thailand. The first photo showed her with roommate Han Lay, the beleaguered Burmese beauty who had to seek refuge in Thailand after the competition because the military junta in her country issued a warrant for her arrest for being an outspoken activist.

The next snap showed her with her MGI sisters – Abena Appiah, Ivana Batchelor, Aurra Kharishma and Lala Guedes – in Phuket for a photo shoot with Amazing Thailand's tourism board.

She told citizens that her favorite Thai dish is Seafood with Coconut Milk.

The next image was the pageant's crowning moment. This was the moment that she "let go and let God."

"I'm the best runner-up ever. It's probably my destiny," she said, alluding to her placements in the pageants she competed in, including the 2018 and 2019 Binibining Pilipinas editions were she finished second runner-up in both.

The next photo showed her in Patrick Isorena's "Gintong Agila" ensemble for the National Costume competition.

"It was like finding the right moment to soar. It was made in 10 days so I needed to practice wearing it during my quarantine at the Golden Tulip Sovereign Hotel. And I think, I'm the only one to have worn a 'golden panty' during a costume show!"

The next two frames showed her gowns for the prelims and final show. The first one, an emerald creation by Louis Pangilinan she called the "Lipad" gown, paired perfectly with Jojo Bragais' shoes. The other photo was of Yeye Pantaleon's bejeweled skin toned gown that she felt was "connected to me."

The next snapshot showed her in a special dinner with MGI president Nawat Itsaragrisil, VP Teresa Chaivisut and outgoing queen Valentina Figuera, together with candidates from Myanmar, Mexico, Ecuador, and Indonesia – as top five winners in a pre-arrival poll.

"Mommy Teresa is so kind and Mr. Nawat is so hands-on, he is the heart of MGI. They work smoothly. People behind the show are very creative. We only had three days to practice our production number and choreography for the show. We knew, me and Miss Indonesia, that we would be placed in front because we got stars from our video dance clips of the choreography during our in-room practice."

The next shot was of the "last two standing" finalists.

"I felt fulfillment in my heart at this point. Abena and I both trained in the Kagandahang Flores (KF) camp. Miss Grand Thailand 2020 is the first black beauty to win the national title. So I understood that MGI is ready to crown its first black beauty, which is also timely because Abena is a strong advocate for 'Black Lives Matter' and 'Stop Asian Hate.' (The year) 2020 was my third attempt to join the Binibining Pilipinas competition as it was my dream to represent the Philippines in the international stage. So when I received the call from BPCI to compete in MGI, I knew I can do it. It all made sense.

"As part of my prize package, I received $6,000, a crown, and sash that I could keep forever. My most unforgettable experience was exploring nine Thai provinces.I was backpacking with Lala Guedes and Miss Grand Panama Angie Keith," she shared.

"Sobrang hirap to compete in a pandemic. Everything is documented. But the good thing is I mended the 'conflict' that has happened between Mr. Nawat and the fans – for the next Miss Grand Philippines queens. I'll continue being a spokesperson to the 'Malaria Free Philippines' campaign – Kilusan Kontra Malaria. I won't change anything in my performance, it was my best. If we need a better Philippines, we need to be better Filipinos. Stop the hate and spread love.

"I can help train our next representative to the MGI crown. I was always nervous during the prelims and final show, and yoga helped. My 'Grandnada' walk was created with the KF camp. My background in dancing and rhythmic gymnastics perfected the said gait through several online sessions.

"This is a competition. As long as a representative does her best, especially in restraint of opinion. If we were to win all the time, there will be no more thrill in it. Let's celebrate whatever the outcome is. Don't spread hate.

"As for other pageants, if I'm still qualified and it's worth it, why not? As long as they align with my purpose and passion. Be really authentic. Be your own kind of beautiful. Align with the organization's causes. Make the crown for us. I fulfilled all my dreams with hard work. Thank you all and we hope to get the Golden crown in the future," enthused the Palawan beauty at the close of the hour-long colloquy.

Share
Previous This company is helping Canada’s film industry beat records — despite the pandemic
Next LOOK: Melissa Ricks gets married in California