‘Sana all’: Groups press for freedom of five ‘HRDay 7’ still in detention 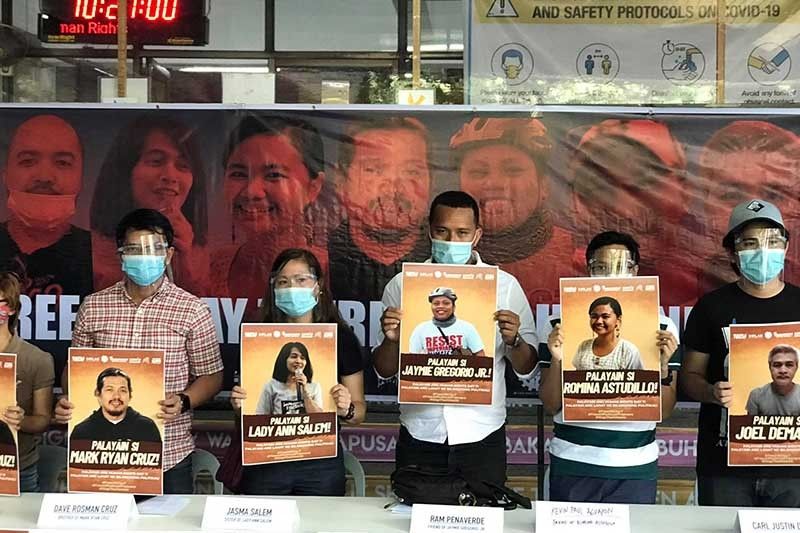 MANILA, Philippines — Following the release of Manila Today editor Lady Ann Salem and labor organizer Rodrigo Esparago, various groups on Saturday called for the release of the rest of the so-called “Human Rights Day 7,” insisting that they are being held on false charges.

“Sana all, dapat all,” said Diane Zapata, partner of labor organizer Denisse Velasco, who was among the seven activists arrested on possession of illegal firearms and explosives charges during Human Rights Day in December 2020.

“Hopefully, at the soonest possible time, the remaining five [of the Human Rights Day 7] and all the other political detainees would be freed,” she added in Filipino.

While groups were jubilant at the release of Salem and Esparago, they acknowledged that this is just a victory in one of many more battles to come.

“This is not a period in our fight for our human rights defenders and all the victims of red-tagging. This is just a semicolon. A case is finished, but we have more battles to face,” Marjohara Tucay of alternative media network AlterMidya said in Filipino.

For Ronalyn Olea of the International Association of Women in Radio and Television, the release of Salem and Esparago is a win that should fuel further resistance to the “macho-fascism” of President Rodrigo Duterte.

A Mandaluyong court finally ordered Friday the release of Salem and Esparago exactly a month after it junked charges for illegal possession of firearms and explosives.

The prosecution had blocked their release following the dismissal of the charges against them, which resulted in their being kept in jail.

In the release order, Mandaluyong Regional Trial Court Branch 209 Presiding Judge Monique Quisumbing-Ignacio sided with Salem in finding that the search warrants that led to her and Esparago’s arrest can be quashed and declared void due to the “deliberate falsehoods” by police officers and their supposed informant.

The court said that the inconsistencies and contradictions in their testimonies negate probable cause, adding that it does not find the police officers and their informant to be credible witnesses as it cannot reconcile their statements.

'Cases against others also bogus'

“Hopefully the release of the five others would follow our release, because our case proves that there is no basis for their detention,” he said.

Velasco, Cruz, Astudilo and Gregorio were supposed to be released on bail, but the prosecution issued an amended resolution which recommended that they not be allowed bail over a charge that was supposed to be for further investigation.

Velasco and Demate have also asked the Supreme Court to release them through a petition for habeas corpus, alleging illegality in their arrest. — with reports from Kristine Joy Patag

Share
Previous How natural gas is emerging as both villain and saviour in the climate change battle
Next Pope, Iraq’s top Shia cleric hold historic meeting

Photo courtesy of Yummie Dingding A mother carrying both a food pack and learning material. …