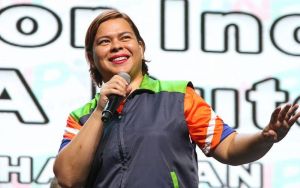 SARA Duterte-Carpio will take her oath as the 15th vice president of the Philippines today, Sunday, June 19, 2022.

The ceremony will be held at the San Pedro Square in her hometown Davao City, where she served as mayor before being elected to the second highest post in the country.

“We want it to be the shortest inaugural speech for a vice president. We do not control the weather, so we do not know what will happen in the next minute in terms of weather,” Duterte-Carpio told reporters.

“It will be very short and will focus on the messages that I gave during the campaign, reiterating what we should do as a country,” she added.

Former president Gloria Macapagal Arroyo, who once served as vice president, has also confirmed her attendance.

At least four ambassadors, governors, representatives and other politicians are expected to attend Duterte-Carpio's inauguration.

The incoming vice president will be wearing for the occasion a custom-made Filipiniana attire by Davao-based designer Silverio Anglacer.

A media briefer said the ceremony will be preceded by a thanksgiving Mass at 3 p.m. at the San Pedro Cathedral to be attended by Archbishop Romulo Valles.

The Mass will be livestreamed to the public via LED walls installed at San Pedro Street, visible up to the corner of CM Recto and Anda Streets, Bolton Street, and the corner of Magallanes and Rizal streets.

Duterte-Carpio will hold a photo opportunity with Valles, bishops, priests and nuns in attendance after the Mass.

The University of Mindanao Alumni Chorale will perform the Philippine National Anthem before the oath-taking rite begins at 4:30 p.m.

Health protocols will be strictly enforced during the event, and everyone will pass through security screening at entry points.

Motorists were advised that several streets around the Davao City Hall and neighboring areas will be closed on Saturday and Sunday for the event.

Duterte-Carpio, the running mate of President-elect Ferdinand “Bongbong” Marcos Jr., was proclaimed the winner of the vice presidential race on May 25 with 32,208,417 votes.