On a crisp Decembermorning, Wally Sisetski could be found painting big red letters on the window of a Saskatoon car dealership.

Staff greeted him cheerily while he scrawled “Merry Christmas” — backwards — from the inside of the glass.

Sisetski has been decorating the windows of Saskatoon businesses since 1970. He calls himself a window splash specialist.

“It’s been a good 50 years so far,” said Sisetski, owner of Signett Signs.

Despite COVID-19 challenges, people can see Sisetski’s colourful business truck all over Saskatoon this holiday season. His freehand window splash art seems to be particularly popular among car dealerships.

“He’s quite a character,” said Paul Loeppky, chairman at the FFUN Motor Group. He has been working with Sisetski for about 40 years.

“We were both young fellows at the same time,” said Leoppky. “We hit it off and we’ve been doing business ever since.”

Over the decades, Sisetski has created a variety of art for FFUN Motor Group, from big window Christmas signs for the showrooms to prices splashed on windshield.

“In the wintertime, he does these windows from the inside. So, he makes these signs writing them backwards, which is quite a feat. He’s got a good eye for that.”

Started as a teenager

He had his first gig as a window splash artist when he was still in high school.

“I never worked for anyone else. And I knew all the guys in town — all the old boys. I was the new kid on the block in 1970 and now I am the old guy on the block.” 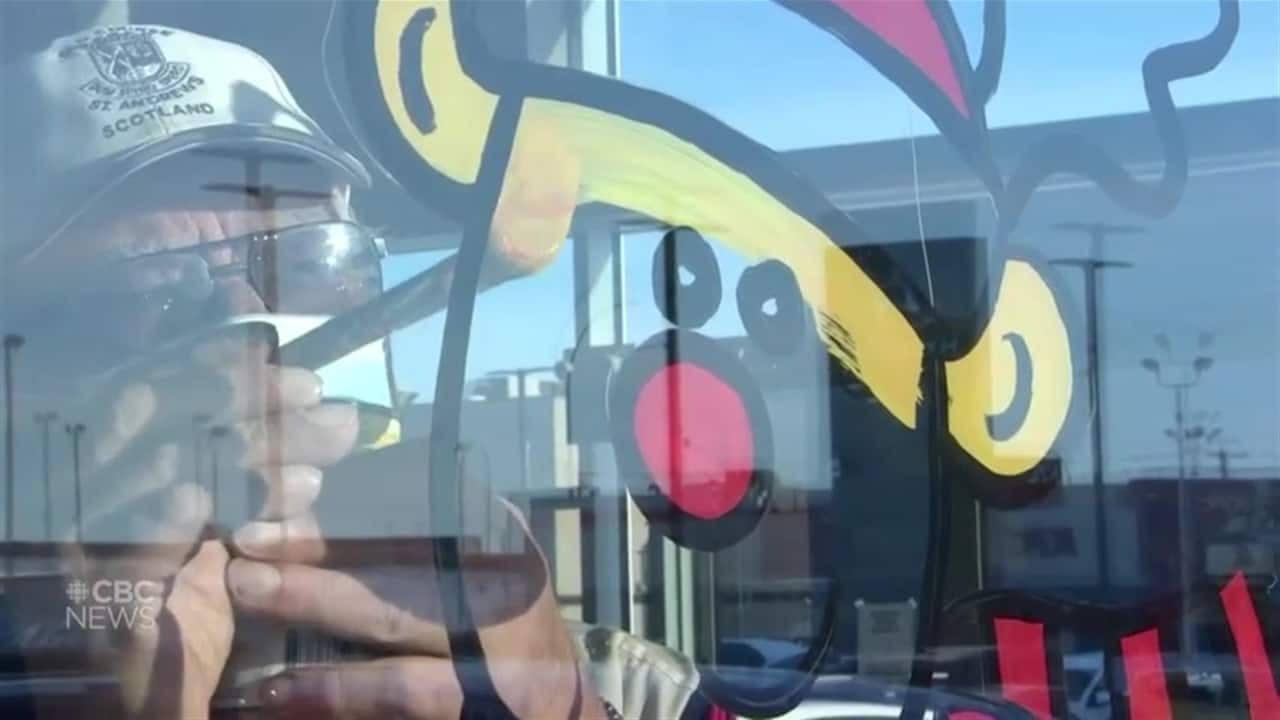 This Saskatoon window painter has already been in the business of making windows bright for 50 years, but he isn’t slowing down.3:10

One time, he spent two days crawling on his hands and knees to paint a logo on a boxing mat. Afterwards his body felt like he was “run over by a freight train.”

“It was the hardest job I can ever remember doing,” he said.

When he is not swinging his paintbrush at a business, he works in his shop, where he makes commercial signs. His repertoire includes freehand sign lettering, computer vinyl graphics and custom carved cedar signs, which he has sold all over the Prairies.

He also spent a few decades in the carnival business.

“Some people will recognize me as the sign carver,” he said.

Prior to the pandemic, he “painted right across Canada as far as Newfoundland, Nova Scotia, New Brunswick [and] British Columbia.

“But this year, wow, like we’re stuck right here.”

Hope for the next generation

Sisetski said many of his clients have been returning every year, even when parents handed down their businesses to their children.

“Some of the people I work for, I worked for their dads before they were even in the business,” he said.

Looking back, he said his industry has changed a lot. He doesn’t know many other sign painters today.

“We’re almost like, not dinosaurs, but, you know, very few, very few left,” he said.

This December, Sisetski will celebrate his 72nd birthday. When asked what’s next for him, he said: “I don’t know — 73.”

“I just keep going, I guess, but you won’t see me expanding.”

Sisetski is proud of the last 50 years and the work he has done. He is disappointed, though, that not more young people get into his kind of career today.

“I want to see a bunch of young people out here doing this stuff because I’m not going to be around for another 50 years.”

While Sisetski finishes his “Merry Christmas” lettering on the windows of the Acura Centre in Saskatoon, he shares some last tips for the next window splash generation: “You can’t hurry this; you have to do it one stroke at a time.”