See the Salazar sisters in a different time

If Four Sisters and A Wedding has welcomed moviegoers to the Salazar sisters’ adult world, replete with matters of the heart and hearth, its prequel, Four Sisters Before The Wedding, will take them to where it all began. Flashback to a decade ago when the sisters had only teenage dreams and concerns. Bobbie, Teddie and Alex were college students, while Gabbie and their youngest sibling and only brother CJ were in high school and elementary. Four Sisters Before The Wedding will see the sisters in a new perspective and a different time frame.

With dramedy as genre, it will treat cineastes to light moments and serious stuff, especially when the sisters experience their first heartbreak. As for the reason, moviegoers need to watch it.

“Four Sisters and A Wedding is one of the most popular movies of Star Cinema,” said Star Cinema business unit head and writer Vanessa Valdez in a recent mediacon via Zoom. 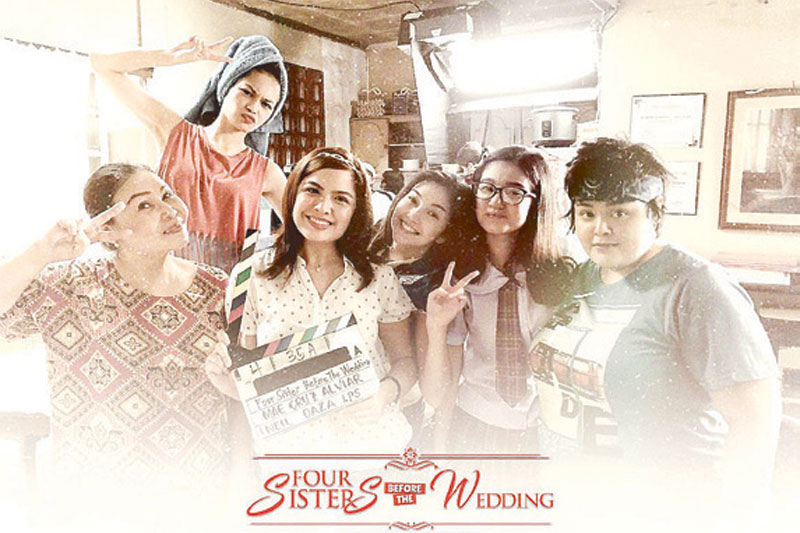 “Actually, until this day, I’m still surprised every time a kid approaches me and asks, ‘Kayo po ba ang nagsulat nito? Pwede ko po bang i-recite yung confrontation.’ (‘Are you the one who wrote it? Can I recite [the dialogues] of the sisters in the movie’s confrontation scene?’) I’m happy when I hear such comments and how a lot of people can relate to the movie. I think the management saw the potential for doing a prequel.” The germ of an idea started when they received a directive to tell a story before the story of Four Sisters and A Wedding, Vanessa added.

“Up to this day, it is still so relevant,” said director Mae Cruz Alviar of the 2013 hit movie, “it remains popular. It is such a classic film. There is pressure (in doing the prequel). But always in any project or in anything that we do, we shouldn’t let the pressure get in the way. Kumbaga may ate (ito) but you also have to own it. It’s not all about just following and copying what was done before. Essentially, kung ano ang naibigay (nito), it’s a family dramedy, you have memorable characters, you have to preserve the characters, ‘yun ang kailangan, ‘yun ang importante and to deliver a family story that is memorable as well.”

Aside from continuing the tradition of making films that capture the essence of Filipino family and values, Four Sisters Before The Wedding will also serve as an avenue for the ABS-CBN Films’ Rise artists. “To give them the opportunity to shine,” shared Vanessa. “They auditioned and the management approved their casting.”

How did the young lead stars prepare for their roles?

“We had meetings and we watched the movie altogether,” answered Belle. “But actually, it wasn’t hard to get into the character kasi naramdaman ko talaga yung Pamilya Salazar on- and off-cam, ramdam na ramdam ko yung warmth nung family.”

As for Gillian, watching the original movie over and over again made a difference. “We read the script several times and studied it in the workshops (we attended),” she said. “We had script reading and team building to work on everybody’s chemistry. The one-on-one with direk Mae did help me. When we came together, there was magic that we clicked.”

This can also be attributed to the script analysis the young stars had. “Na himay po talaga namin yung bawat character (We were able to break down every character) for us to know and understand the real dynamics that we should have with each other as we played the roles,” said Charlie.

The younger Salazar sisters are different from the ones the public has met in Four Sisters and A Wedding, said Alexa.

“We were not necessarily trying to copy anything from them, but of course, we have the essence of the characters and their personalities.”

The prequel will also allow audiences to meet Mama Grace and her husband Papa Caloy, played by Carmina Villarroel and Dominic Ochoa, and the young CJ, Clarence Delgado.

Share
Previous Finding Agnes is a lesson in soul-searching
Next What is Sylvia’s one great source of strength?