The Senate on Saturday acquitted Donald Trump of inciting the attack on the U.S. Capitol, concluding a historic impeachment trial that exposed the fragility of America's democratic traditions and left a divided nation to come to terms with the violence sparked by his defeated presidency.

7 Republicans break from party and vote to convict former president

Trump acquitted in 2nd impeachment trial: How it played out

Donald Trump was acquitted in his second impeachment trial by a vote of 57-43 in the U.S. Senate.5:32

Donald Trump was acquitted Saturday of inciting the attack on the U.S. Capitol, concluding a historic impeachment trial that spared him the first-ever conviction of a current or former U.S. president but exposed the fragility of America's democratic traditions and left a divided nation to come to terms with the violence sparked by his defeated presidency.

Barely a month since the deadly Jan. 6 riot that stunned the world, the Senate convened for a rare weekend session to deliver its verdict, voting while armed National Guard troops continued to stand their posts outside the iconic building.

The quick trial, the nation's first of a former president, showed in raw and emotional detail how perilously close the invaders had come to destroying the nation's deep tradition of a peaceful transfer of presidential power after Trump had refused to concede the election. Rallying outside the White House, he unleashed a mob of supporters to "fight like hell" for him at the Capitol just as Congress was certifying Democrat Joe Biden's victory. As hundreds stormed the building, some in tactical gear engaging in bloody combat with police, lawmakers fled for their lives. Five people died.

The verdict, on a vote of 57-43, is all but certain to influence not only the former president's political future but that of the senators sworn to deliver impartial justice as jurors. Seven Republicans joined all Democrats to convict, but it was far from the two-third threshold required.

The outcome after the uprising leaves unresolved the nation's wrenching divisions over Trump's brand of politics that led to the most violent domestic attack on one of America's three branches of government. 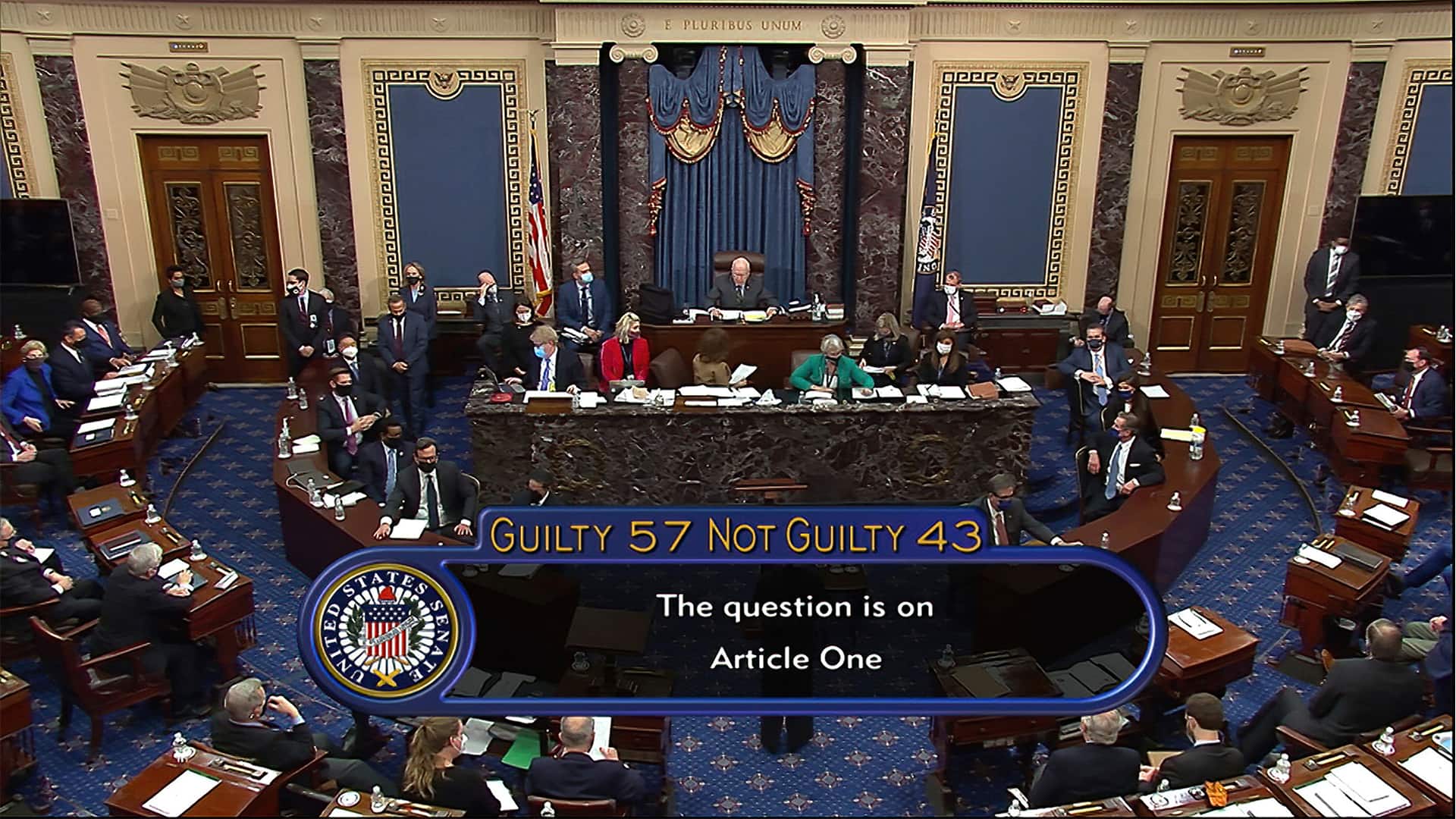 The U.S. Senate voted 57-43 at Donald Trump's impeachment trial, falling short of the votes necessary to convict him for his role in the Jan. 6 insurrection on the Capitol.2:39

"Senators, we are in a dialogue with history, a conversation with our past, with a hope for our future," said Rep. Madeleine Dean one of the House prosecutors in closing arguments.

"What we do here, what is being asked of each of us here, in this moment, will be remembered."

Trump, unrepentant, welcomed his second impeachment acquittal and said his movement "has only just begun." He slammed the trial as "yet another phase of the greatest witch hunt in the history of our Country."

Though he was acquitted of the sole charge of incitement of insurrection, it was easily the largest number of senators to ever vote to find a president of their own party guilty of an impeachment count of high crimes and misdemeanors.

Statement by Donald J. Trump, 45th President of the United States of America: <a href="https://t.co/Z3nG6xeN9Z">pic.twitter.com/Z3nG6xeN9Z</a>

Even after voting to acquit, the Republican leader Mitch McConnell condemned the former president as "practically and morally responsible" for the insurrection. McConnell contended Trump could not be convicted because he was gone from the White House.

In a statement issued several hours after the verdict, Biden highlighted the bipartisan nature of the vote to convict as well as McConnell's strong criticism of Trump. In keeping with his stated desire to see the country overcome its divisions, Biden said everyone, especially the nation's leaders, have a duty "to defend the truth and to defeat the lies."

"That is how we end this uncivil war and heal the very soul of our nation. That is the task ahead. And it's a task we must undertake together," said Biden, who had hardly weighed in on the proceedings during the week. 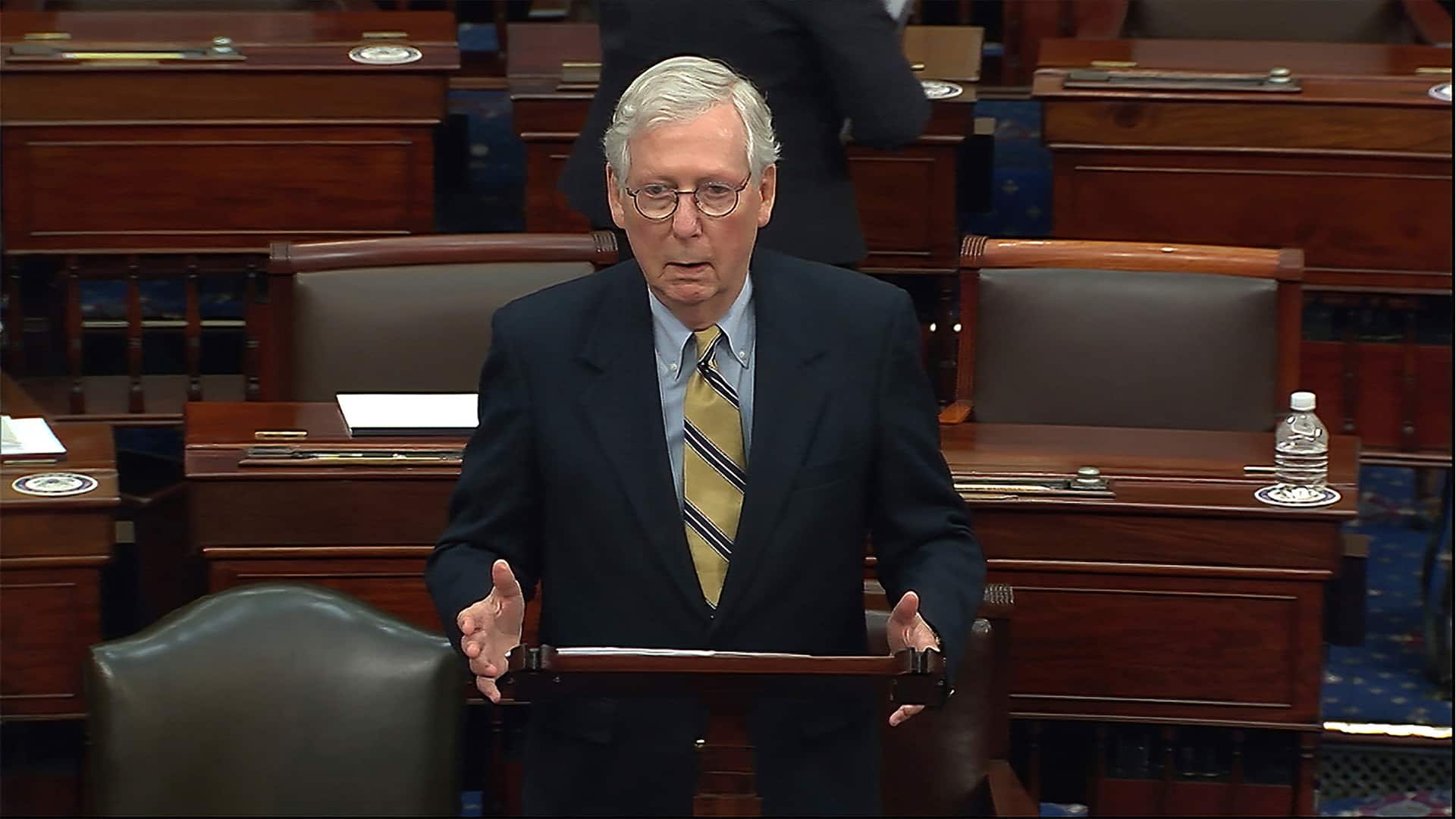 Mitch McConnell, the Senate's top Republican, excoriated Donald Trump on Saturday for the Jan. 6 attack on the U.S. Capitol, but defended his vote to acquit him at the impeachment trial.2:49

The trial had been momentarily thrown into confusion when senators Saturday suddenly wanted to consider potential witnesses, particularly concerning Trump's actions as the mob rioted. Prolonged proceedings could have been especially damaging for Biden's new presidency, significantly delaying his emerging legislative agenda. Coming amid the searing COVID-19 crisis, the Biden White House is trying to rush pandemic relief through Congress.

The nearly weeklong trial has delivered a grim and graphic narrative of the riot and its consequences in ways that senators, most of whom fled for their own safety that day, acknowledge they are still coming to grips with.

House prosecutors have argued that Trump's was the "inciter in chief" stoking a months-long campaign with an orchestrated pattern of violent rhetoric and false claims they called the "big lie" that unleashed the mob. Five people died, including a rioter who was shot and a police officer.

Trump's lawyers countered that Trump's words were not intended to incite the violence and that impeachment is nothing but a "witch hunt" designed to prevent him from serving in office again.

I salute the Republican Senators who voted their conscience and for our Country. <br><br>Other Senate Republicans’ refusal to hold Trump accountable will go down as one of the darkest days and most dishonorable acts in our nation’s history.

The senators, announcing their votes from their desks in the very chamber the mob had ransacked, were not only jurors but also witnesses. Only by watching the graphic videos — rioters calling out menacingly for House Speaker Nancy Pelosi and Vice-President Mike Pence, who was presiding over the January certification tally — did senators say they began to understand just how perilously close the country came to chaos.

Many senators kept their votes closely held until the final moments on Saturday, particularly the Republicans representing states where the former president remains popular. Most of them ultimately voted to acquit, doubting whether Trump was fully responsible or if impeachment is the appropriate response.

The second-ranking Republican, John Thune of South Dakota, acknowledged, "It's an uncomfortable vote," adding, "I don't think there was a good outcome there for anybody."

In closing arguments, lead defender Michael van der Veen emphasized an argument that Republican senators also embraced: that it was all a "phony impeachment show trial."

"Mr. Trump is innocent of the charges against him," said van der Veen. "The act of incitement never happened."

The House impeached Trump on the sole charge of incitement of insurrection one week after the riot, but the Senate was not in full session and McConnell refused requests from Democrats to convene quickly for the trial. Within a week Biden was inaugurated, Trump was gone and Pelosi sent the article of impeachment to the Senate days later, launching the proceedings.

The turmoil on Saturday came as senators wanted to hear evidence about Trump's actions during the riot, after prosecutors said he did nothing to stop it.

Fresh stories overnight had focused on Rep. Jaime Herrera Beutler of Washington state, who said in a statement that Trump had rebuffed a plea from House Republican leader Kevin McCarthy to call off the rioters.

Several Republican senators voted to consider witnesses. Lindsey Graham of South Carolina changed his vote to join them on that 55-45 vote.

But with the Senate facing a prolonged trial and the defence poised to call many more witnesses, the situation was resolved when Herrera Beutler's statement about the call was read aloud into the record for senators to consider as evidence. As part of the deal, Democrats dropped their planned deposition of the congresswoman and Republicans abandoned their threat to call their own witnesses. They also agreed to include Republican Sen. Mike Lee's time stamp of a call from Trump around the time Pence was evacuated, minutes after Trump sent a tweet critical of his vice president.

Impeachment trials are rare, senators meeting as the court of impeachment over a president only four times in the nation's history, for Andrew Johnson, Bill Clinton and now twice for Trump, the only one to be twice impeached. There have been no convictions.

Unlike last year's impeachment trial of Trump in the Ukraine affair, a complicated charge of corruption and obstruction over his attempts to have the foreign ally dig up dirt on then-campaign rival Biden, this one brought an emotional punch displayed in graphic videos of the siege that laid bare the unexpected vulnerability of the democratic system.

At the same time, this year's trial carried similar warnings from the prosecutors that Trump must be held accountable because he has shown repeatedly he has no bounds. Left unchecked, he will further test the norms of civic behaviour, even now that he is out of office still commanding loyal supporters, they said.

Share
Previous Trailer: Angelica, Coco show chemistry in ‘Love or Money’
Next How N.L.’s unprecedented election suspension is a caution about coronavirus variants