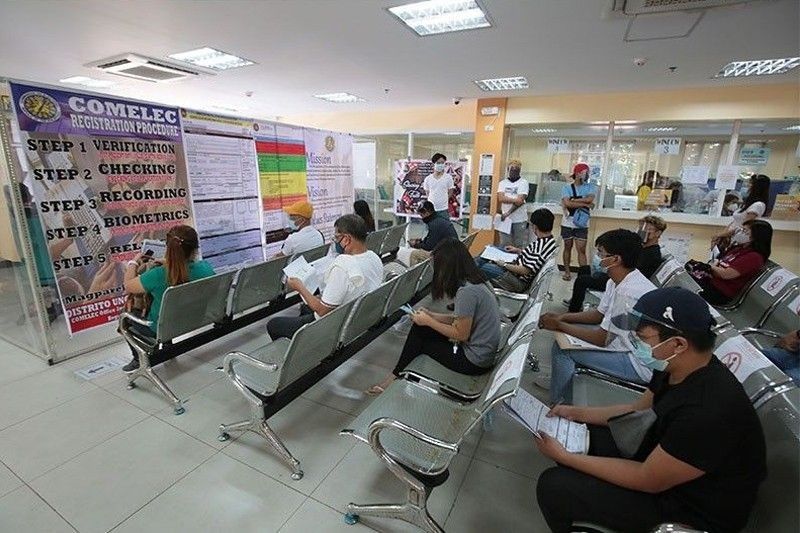 MANILA, Philippines — A Senate panel on Friday deferred deliberations on the Commission on Election's proposed budget for 2022 in a move to further pressure the poll body to extend the voter registration period by a month.

This comes after senators agreed earlier this week to use all means available to compel Comelec to move the registration deadline from September 30 to October 31, alarmed by reports of long lines at registration venues unable to accommodate all those hoping to cast their vote next year.

Comelec had so far rejected calls and formal resolutions urging it to take action on the matter.

Sen. Risa Hotiveros, vice-chairperson of the Senate finance committee, suspended the hearing on the poll body's proposed P4.31 billion 2022 budget, on top of a P13.63 budget for upcoming elections, after just over an hour.

This left Comelec officials unable to finish their presentation as senators questioned their refusal to move the registration deadline instead.

"The chair enjoins the Comelec, through its Chairman [Sheriff] Abas, that if possible another en banc discussion [on voter registration] be held for a third and last time," Hontiveros said partially in Filipino.

Senate Minority Leader Franklin Drilon, a former justice secretary, also reminded Comelec that the law mandates that the voter's registration be conducted daily until 120 days before a regular election.

“Your reliance on your own resolution is out of place," he said. "In my humble opinion, it is illegal and a violation of the Constitution and the decisions of the Supreme Court interpreting election laws."

A bill at the Senate extending the registration period has already been passed on second reading and is expected to clear the chamber next Monday. A counterpart measure at the House of Representatives was approved by a panel earlier Friday.

As a compromise, Comelec at a separate hearing held by the Joint Congressional Oversight Committee on Automated Election System offered to extend voter registration but only by a week, after certificates of candidacy are filed from October 1 to 8.

But members of the oversight committee were unsatisfied with the proposal. "The one week offered by Comelec is far from the one month [sought] by the legislature," Sen. Imee Marcos said in Filipino, adding that the offer "is not a compromise." Marcos is also chair of the Senate Committee on Electoral Reforms and People's Participation.