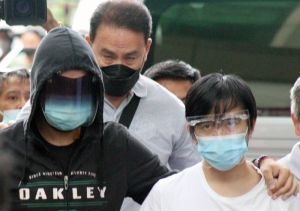 In this file photo Pharmally executives Mohit Dargani (left) and Linconn Ong (right) being escorted by security detail from the Senate of the Philippines as they are being brought to the Pasay City Jail in Pasay City on November 29, 2021. PHOTO BY ENRIQUE AGCAOILI

THE incoming 19th Congress should review the rules used by lawmakers to charge witnesses with contempt and detain them without a court trial. This concern, of course, stems from the Senate's blue ribbon committee investigation of Pharmally Pharmaceutical Corp., which allegedly overpriced items sold to the government during the pandemic. Before the Senate adjourned last week, it finally released the two Pharmally executives, who were kept in the Pasay City Jail for about six months.

As has been said before, the Senate should turn over any evidence of alleged graft to the Ombudsman so that the case may be tried in the proper venue — a court of law. If found guilty, Pharmally and its executives should face the repercussions. Furthermore, subpoenas issued by Congress cannot be snubbed, and witnesses should be mindful about the threat of perjury if they lie under oath.

The Pharmally case, however, seems like one of Senate overreach, especially when it acted as prosecutor, judge and jury against uncooperative witnesses. In doing so, the lawmakers arrogated powers that the 1987 Constitution assigns to other branches of government.

Congress should study similar rules in the United States, which was the model of the Philippine system. Over there, lawmakers can cite witnesses for contempt as was the case with former White House officials of the Trump administration. The US Congress is investigating the incident on Jan. 6, 2021 when a mob stormed the Capitol Building in Washington, D.C.

The US Congress, however, only refers contempt cases to their Department of Justice, which is, like in our system, in the executive branch. And after its own investigation, the US Justice department can charge or indict someone, and then, the case goes to court, which determines guilt or innocence and hands down punishment if needed. Only after a guilty verdict can a person be imprisoned, and even then, the length of detention is specified in US law.

Meanwhile in the Philippines, senators appropriated contempt powers and ordered some Pharmally executives to be detained without a trial or opportunity to defend themselves with legal representation. The senators accused the executives of being “evasive,” perhaps forgetting that even the accused have rights, including the right against self-incrimination.

No one should be jailed for merely refusing to answer questions or providing testimony that would be useful to a certain political camp during election season. Of course, lying under oath is an offense, but once again, a court should be the one to determine that the testimony given was actually false.

In their defense, a senator said their actions in the Pharmally investigation were in accordance with Senate rules. But the lawmaker forgets that no rule trumps the Constitution, including the Bill of Rights and the principle of separation of powers.

Ironically, those who pushed for detaining the Pharmally executives spent much of the last campaign reminding people about the human rights abuses committed during the martial law regime of Ferdinand Marcos. But while doing so, they were exhibiting their own authoritarian bent.

In fairness to the senators involved in the Pharmally probe, they were not the first to disregard the basic rights of some witnesses. In fact, members of the House of Representatives have acted similarly during some of their own past investigations.

And to be clear, Pharmally might be guilty of corruption, but that is for the courts to decide, not the Senate. Lawmakers should know their own responsibilities. And when they do investigate, it should be in aid of legislation.

Obviously, removing politics from the equation is difficult, especially during the election season in the Philippines. But that does not justify trampling on the basic rights of people, including those who have been accused of a crime.

Despite their illegal detention, Pharmally executives may not enjoy public sympathy. But that is not the point. The point is that unchecked powers, like those assumed by lawmakers, are prone to abuse. And that should worry every citizen.

To be realistic, though, it seems unlikely that lawmakers themselves will clip their powers. Someone else should step up and challenge their imperious rules in the courts.

REPORTS on the Philippine decision to import fish shine light on the need for better, …