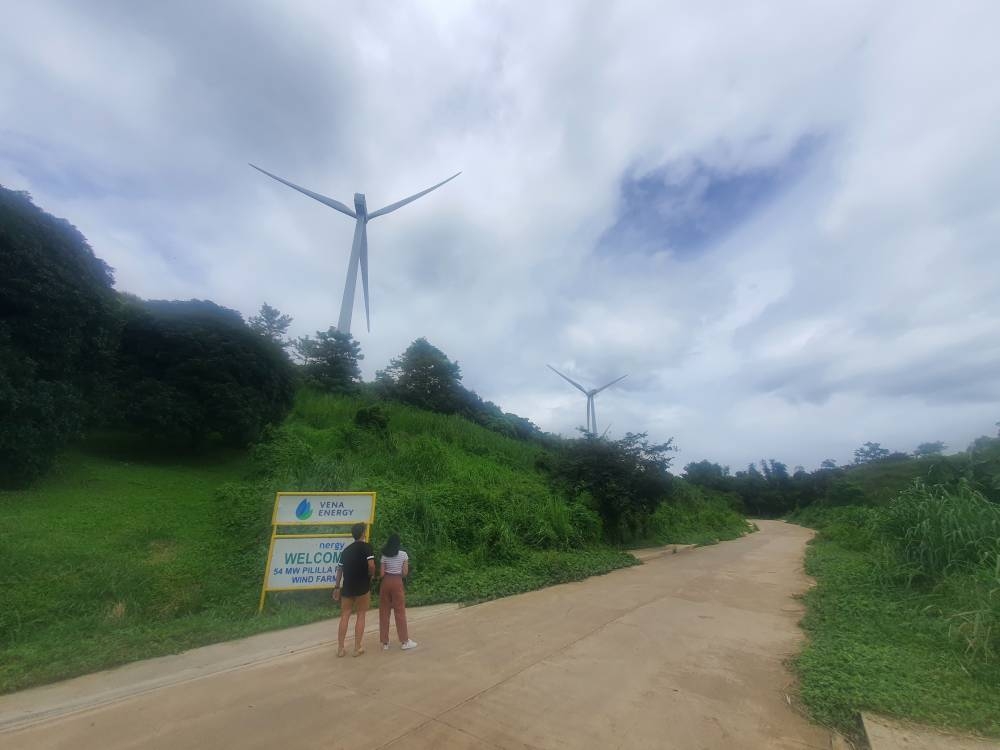 WIND POWER A couple on their weekend walk stops to gaze at the windmills of Pililla, Rizal on Saturday, July 23, 2022. PHOTO BY DENNIS ABRINA

TWO recent developments could provide renewed impetus to unshackle the country from its dependence on imported energy and to sharpen the focus on tapping indigenous, clean and sustainable power source1s.

After meeting with US Secretary of State Antony Blinken last week, Foreign Affairs Secretary Enrique Manalo announced that the US will help the Philippines build a more robust framework for developing clean energy.

Last Tuesday, Energy Secretary Raphael Lotilla said President Ferdinand Marcos Jr. has directed him to think up ways to “accelerate and expand the development of our indigenous energy resource1s in order to provide accessible and affordable energy to the Filipino people as we transition to a sustainable low-carbon future.”

Energy security has long been a goal of past administrations, but the focus on achieving this goal has never been as sharp as it is now.

According to Lotilla, 56.8 percent of the country's energy supply comes from abroad. In 1998, 5.77 million tons of coal was used up by the generating industry, 82 percent of it imported almost exclusively from Indonesia. Last year, coal importation was at 87.2 percent.

In more than two decades, there was no move at all to cut our dependence on fossil fuel.

Yet, only some 65 percent of the population has grid-supplied electric power. Clearly, the government's household electrification targets were never fully met.

“So you can say that we are very energy insecure,” Lotilla said.

Coal and oil make up more than 70 percent of our energy source1s for generating electricity. The rest comes from hydro, natural gas, geothermal and renewable energy.

The trend needs to be reversed — less dependence on coal and oil, and an aggressive shift to the other energy source1s, notably renewables.

Lotilla said President Marcos envisions a “policy environment” that would make the development of indigenous energy resource1s attractive to investors.

The President's vision fits in nicely with the US commitment to help the Philippines transition to clean energy.

Already, the initiatives have been set in motion. The US State Department said that Washington and Manila will “collaborate closely with one another on nuclear and clean energy.”

Last March, the two countries signed a memorandum of understanding which draws up an outline for cooperation and a “mutually aligned approach to nonproliferation on civil nuclear issues.”

The US also provided assistance to the Philippines through the “Foundational Infrastructure for Responsible Use of Small Modular Reactor Technology program which deepens our strategic ties, supports energy innovation, and advances our technical collaboration with the Philippines on secure, safe nuclear energy infrastructure,” the State Department said.

Funding is also flowing in. The US Agency for International Development has allotted $34 million for its Energy Secure Philippines program “to support a more competitive, secure, and resilient Philippine energy sector by working to improve the performance and efficiency of energy utilities, deploy renewable energy systems, enhance competition in the power sector, and bolster energy sector cybersecurity.”

Under the program, over $750 million in private sector investment will be raised to develop 500 megawatts more to boost clean energy generation capacity.

Other initiatives include an agreement by State Department's Bureau of Energy Resource1s Clean Energy Demand Initiative and the Philippine government to talk with 12 companies which are interested in investing up to $2.1 billion in the country's clean power infrastructure, and funding from the US Trade and Development Agency (USTDA) for projects ranging from smart grids, renewable power generation, distributed energy, and energy storage systems.

The USTDA has completed 33 energy projects for the Philippines that have been credited by US companies by generating over $557 million in US exports.

There is an urgency in reducing the country's dependence on imported energy and developing indigenous and clean source1s of power.

Our energy requirements are projected to double in 20 years, and unless the supply keeps up with the rising demand, we will be constantly scrambling to meet growth goals.

It is a situation we must do our best to avoid.