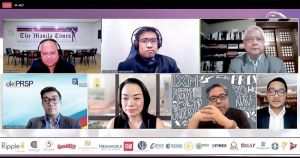 MILLENNIALS and the “Generation Z,” who make up 52 percent or more than 30 million of the electorate, will rely heavily on social media in deciding whom to vote in the May elections, a public relations and media affairs expert said Thursday.

Megaworld Corp. Senior Assistant Vice President and head of Public Relations and Media Affairs Harold Geronimo, who is also president of the Public Relations Society of the Philippines, analyzed the youth vote during an online forum of The Manila Times.

Generation Z is the demographic sector made up of youths born during the late 1990s to the early 2010s.

Geronimo said the heavy reliance of young voters on social media came about after the online culture became part of the new norm at the height of the Covid-19 pandemic.

“When Covid-19 happened, we were all forced into our own cocoons for extended periods, we were physically cut off from the world and our only other link to everyone else was through the virtual realm, through social media postings,” he said.

Online access rose dramatically as Filipinos began to adjust their lifestyle to their online regime and work-from-home “suddenly became the thing.”

The younger generation had no choice but to adapt to e-learning setups, Geronimo said.

“The pandemic fast-tracked the media's pivot to the digital realm. Media habits transformed almost overnight. The digitalization of media outlets went on hyperdrive, as a result almost all traditional media outlets have become multimedia,” said Geronimo.

Because social media now largely dictates the formation of opinions, perceptions, and lifestyles, it will be critical in determining voters' choices on May 9.

Geronimo said some groups predicted this digital transformation even before the pandemic and started using social media platforms to reinforce their political ambitions.

Many politicians began to turn to social media to promote their “good reputation” to the youth.

“Way back in 2018 and 2019, I have seen a lot of politicians and known government officials — they have not yet declared their candidacies, but they are already on social media. They have their YouTube accounts, they also have their TikTok accounts, talking [about] what they and their families, their previous positions have done to help the country,” Geronimo said.

On the other hand, social media can also be vital in addressing corruption and transparency issues because it makes it easier for people to take part in the election process, he said.

He pointed out that irregularities can easily be exposed real time through social media.

“That is how important and significant the role of social media [is]. Anyone can be a communicator, everyone on social media can actually send out photos or videos of any irregularities or anything about the elections real time and, usually mainstream media would pick that up and make them as stories,” said Geronimo.

Ripple8 Inc. Managing Partner and Media Relations and Activations Director Michelle Orosa-Ople, who joined the forum, said that with the emergence of digital platforms, communicators and PR practitioners are finding it difficult fighting lies and advocating the truth online.

Orosa-Ople said the dark side of social media is that it can be a vehicle for sowing confusion and disinformation.

“A lot of them, especially the younger millennials to the Gen Z and the Gen Alpha, are trying to understand what they are seeing, most of them are taking what they see online as truth. Why? Because they were not there, they were not able to experience the things that they are seeing online, the stories, the chronicled events, the news items they are only seeing online,” Orosa-Ople said.

“So many of them are very much overwhelmed with what they are seeing online and some of them don't know what to make of it,” she said.

That is why it is imperative for communicators and PR practitioners to find ways “to innovate experience in the time of digital content,” Orosa-Ople said.

“In a digital world rife with information and disinformation, the best solution is to go analog, to find ways to go beyond the digital streams and get the people to act,” she said.

“When it comes to social media, it's a waste of time to go after people who don't believe in what you do. If you want to use digital, know what it is, know the power of community, and the power of being able to build those relationships and start from there. Less is more,” she said.