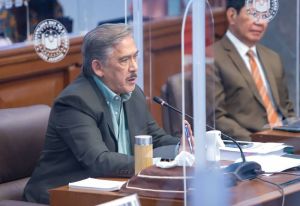 Senate President Vicente Sotto III presides over the third hybrid inquiry of the Committee of the Whole on the proliferation of smuggled vegetables and other agricultural products in the country as well as the assessment issues in the Bureau of Customs (BOC), Tuesday, April 12, 2022. Contributed Photo

The Senate Committee of the Whole, led by Sotto, resumed its investigation on the reported vegetable smuggling mostly from China.

National Intelligence Coordinating Agency (NICA) Director Edsel Batalla confirmed that the four are on the agency's list of alleged smugglers, but the information against them was still being validated.

Batalla said that NICA listed over 20 players and protectors of smuggling, some of whom are officials of the Department of Agriculture (DA) and the Bureau of Customs (BoC). He declined to identify them.

Sotto said that Filipino farmers lose some P2.5 million per day because of the proliferation of contraband vegetables in the country.

“[Illegal] Importation is the culprit,” he added.

Customs Commissioner Rey Leonardo Guerrero said some of the names mentioned by Sotto were familiar.

Sen. Panfilo “Ping” Lacson urged the NICA to speed up its processing of intelligence information on agricultural “smugglers” and their supposed protectors in government.

The senator said that if these smugglers and protectors are not named and charged, a vicious cycle will continue where smugglers lie low immediately after a Senate hearing then resume their activities after a few weeks.

He cited the observation of Agot Balanoy, the public relations officer of a group of Benguet-based farmers, that the volume of smuggled vegetables in markets will decrease after a Senate hearing but increase after two to three weeks.

“Please speed up the processing of intelligence information so we can file charges against those who should be charged. There should be a bit of urgency,” Lacson said.

Sen. Francis “Kiko” Pangilinan grilled DA officials on the proliferation of Korean strawberries to the detriment of local farmers.

Pangilinan asked DA Assistant Secretary Federico Laciste Jr. to divulge the names of the supposed politicians who are protecting the big-time smugglers.

Laciste earlier admitted that big time personalities and politicians involved in smuggling have called him for favors.

“If you keep on changing your position, you are actually recanting what you said,” Pangilinan said. “Your previous statement was, there were politicians involved, but now you are telling us that the name has been name-dropped. Whatever it is, could you please submit to us the names of those that were name-dropped.”

Sotto voiced dismay with government reports that not a single smuggler or their protectors have been sent to jail despite the numerous arrests made by anti-smuggling authorities.

Senior Assistant State Prosecutor Charlie Guhit said that based on their records, only four persons have been charged with smuggling, but one case was dismissed, while the others are still pending in court.