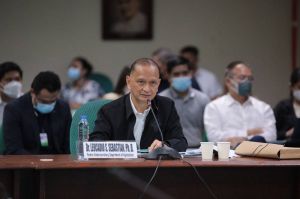 Appearing personally at the resumption of hybrid hearings of the Senate blue ribbon committee headed by Sen. Francis Tolentino on the controversial sugar importation, Serafica said on July 29, he met with the stakeholders to brief them on the tight supply and rising prices of sugar.

According to him, almost all of the stakeholders present during the meeting recommended the 300,000 MT importation.

Serafica said President Ferdinand “Bongbong” Marcos Jr. and Executive Secretary Victor Rodriguez did not object to the importation of sugar that he was asked to prepare and submit.

“I was asked to submit a plan for the importation of sugar. I did not hear any objection to it,” he also said.

Contrary to what is circulated in the media, Serafica and Leocadio Sebastian, Department of Agriculture (DA) chief of staff and undersecretary for operations, who had also resigned, clarified that the President has not accepted their resignations but merely put them under preventive suspension while an investigation is in progress on the controversial Sugar Order (SO) 4.

Press Secretary Trixie Cruz-Angeles earlier confirmed that Serafica and SRA board member Roland Beltran resigned from their posts over the importation order without the approval of the President.

“We confirm the acceptance of administrator of the Sugar Regulatory Administration's Mr. Hermenegildo Serafica's resignation, as well as the resignation of Atty. Roland Beltran of the [SRA] board,” Cruz-Angeles said.

The “immediate” acceptance of their resignations was contained in two letters dated Aug. 15, 2022, and separately sent to Serafica and Beltran.

The letters were signed by Rodriguez, on behalf of Marcos.

“On behalf of President Ferdinand Marcos Jr., I wish to inform you that your resignation has been accepted immediately,” the letters, addressed to Serafica and Beltran, read.

A copy of the letters was released by the Office of the Press Secretary.

Their resignations came in the wake of the unauthorized signing of SO 4, a resolution allowing the importation of 300,000 MT of sugar.

“I sincerely offer my apologies, Your Excellency, for having approved Sugar Order 4 on your behalf, and through the authority, you had vested upon me. It has become clear that the same was not in keeping with your administration's desired direction for the sugar industry,” Sebastian said in his letter.

Malacañang earlier said the issuance of SO 4 was “illegal and unauthorized,” as it was rejected by the President, considering the administration's wish to fulfill a “balancing act” of securing affordable and adequate supply for consumers, as well as benefiting local producers.