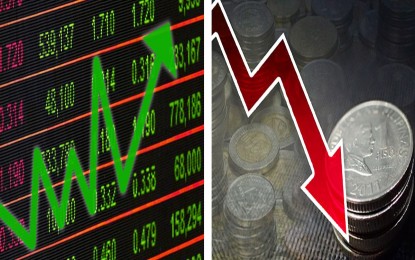 MANILA – The Philippine Stock Exchange index (PSEi) inched up anew Wednesday ahead of the Federal Reserve decision announcement, but the peso depreciated against the US dollar.
The local stock barometer gained 0.14 percent, or 9.53 points, to 6,890.73 points.
All Shares posted a higher jump of 0.51 percent, or 21.58 points, to 4,286.57 points.
Half of the sectoral indexes also gained during the day, with Services rising by 2.94 percent; Mining and Oil, 2.24 percent; and Industrial, 0.94 percent.
On the other hand, the Property index fell by 0.87 percent, Financials by 0.68 percent, and Holding Firms by 0.28 percent.
Volume remained thin at around 705.34 million shares amounting to PHP6.49 billion.
Advancers led decliners at 128 to 82, while 37 shares were unchanged.
“Philippine shares traded thinly with some upside as US equities tried to recover from the previous session’s rout. Investors were also cautious as the Fed’s two-day policy meeting started last night,” said Luis Limlingan, Regina Capital Development Corporation head of sales.
Limlingan said the Federal Reserve is expected to keep interest rates steady “but the timing of the asset purchase taper is something the market is keeping a close eye on.”
“Fed Chair Jerome Powell communicated that the timing ‘will not be intended to carry a direct signal’ on the timeline of the rate hikes,” he said, adding the Fed is also scheduled to release Wednesday night the updated quarter economist forecast, or what is called the dot plot.
Meanwhile, the peso weakened against the greenback after finishing the day at 50.27 from 50.14 a day ago.
It opened the day at 50.18 and traded between 50.08 and 50.3.
Average level for the day stood at 50.182.
Volume totaled to USD1.24 billion, higher than the previous day’s USD998.7 million. (PNA)