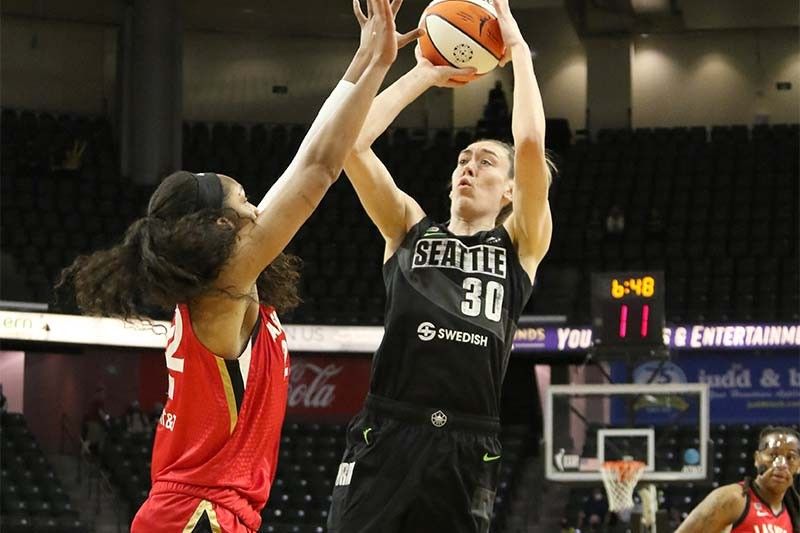 MANILA, Philippines — The Seattle Storm picked up right where they left off from last season in their first game of the 2021 WNBA season with a 97-83 win over the Las Vegas Aces on Saturday (Sunday, Manila time).

Despite an overhauled roster, Breanna Stewart and Jewell Loyd propelled the Storm past the Aces with 50 combined points in a rematch of last year's WNBA Finals in the bubble.

The defending champions received a scare, however, when veteran guard Sue Bird limped off of the court after a collision with Liz Cambage with 6 and a half minutes left in the game.

Fortunately, Bird was able to return to the game just two minutes of action later. She even added a three pointer — her third of the game — with 1:24 ticks left to pad the Storm's lead to 15.

Bird finished with 11 points and eight assists to tip off her 18th season in the league.

Meanwhile, reigning MVP A'ja Wilson paced the Aces with 24 points while Cambage, who missed out last season, had 16 markers.

In the other game of the day, the Chicago Sky made easy work of the 2019 WNBA champions Washington Mystics sans Elena Delle Donne, 70-56.

A second salvo where they outscored the Mystics, 24-11, blew the game wide open for the Sky.

Newcomer Candace Parker had a great debut for the Sky with 16 points, eight rebounds, and four assists.